I know I've said this before, but it can get pretty hot in Tucson.  That wouldn't matter if it cooled down overnight, but in the summer months, you can kiss COOL goodbye!

One of the things that will help this situation is to provide more shade.  Lucky for me, the power situation is SO much cheaper than in California that I run the AC unit all day and night with my thermostat set at 81 degrees.  To help even more, I'm providing more shade at the front of the house. 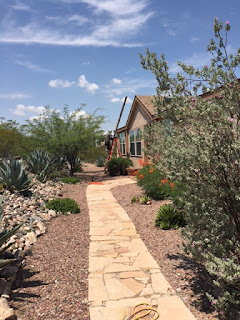 The crew of one arrived a tad late, but started to work immediately.  After discussing the location and pitch of the roof, I went inside.  I've been known to stand around and watch every bolt installed, but decided this time to let him do his work without someone watching over his shoulder.  Maybe I should have taken a peak a little more often. 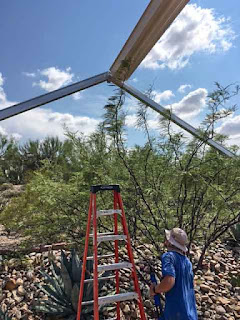 When I finally checked on the progress, wasn't I surprised to see it out three feet further than what we measured.  There are two mesquite trees to the right I was trying to keep outside the cover.  I was again surprised to find two limbs cut from the tree.  So much for symmetry!

I didn't get to think about that much when he told me his second in command who showed up late, had just cut my irrigation line in half ..... not once, but TWICE!!  Oh I know they will fix it, it's just irritating.  If you know you broke it once, why did you dig six feet away in the same line and do it again? 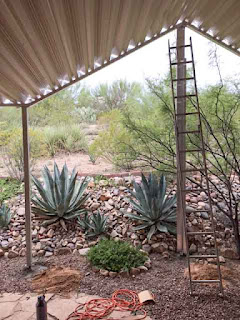 Come to find out, the walkway and retaining wall (really just a pile of rocks on the side of the hill) are not straight and even with the house.  Meaning I have enough room on this end for a dance floor and living room furniture!

My two mesquite trees will require a little more trimming today, but I can handle that. 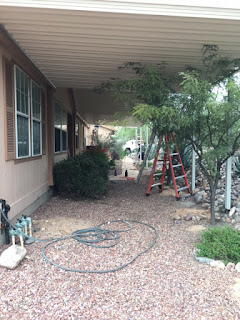 In the end, it's strong and beautiful and will shade that side of the house, possibly lowering my AC bill even further!!  There is still some molding to be wrapped around the outside edge and some cleanup, but otherwise she's done.  Now it's on to the back yard and gutter installation. 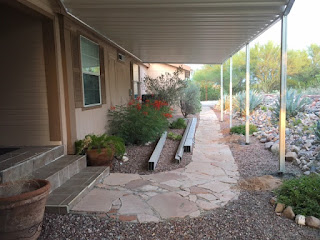 My new porch got her first run-in with the weather last night and stood up well.  I know I keep talking about the thunderstorms, but I'm telling you ..... you have never experienced lightning and thunder like the Arizona desert provides.

About 11:30 Jessie climbed on top of my head, waking me up.  I heard a distant rumble.  In a matter of minutes, there was a lightning flash that almost blinded me, followed instantly by a crack of thunder that made me jump out of bed!!  I'm not kidding folks ..... I'm sure that hit in my back yard.

Good grief Charlie Brown!!!!  Fifteen minutes later it was still going strong, with flash after flash lighting up my bedroom like strobe lights.  Thunder vibrated the entire house right down to the foundation, rattling the windows worse than any earthquake I've experienced in California.  Another ten minutes went by and the rain came down like a waterfall.

The whole thing lasted about 45 minutes before the thunder moved on down the valley.  It took another hour before Miss Jessie Belle quit shivering, in spite of being rolled up in the blankets and squeezed tightly to me.  Her breathing shook the bed almost as much as the thunder did.

As usual, there won't be any trains for awhile as they check the tracks.   Apparently a few weeks ago there was a big derailment in Marana (about 45 minutes northwest) due to flooding.

I had plans for today, but since construction began a little late yesterday, I've cancelled them all to keep an eye on the gutter situation.  I'm pretty sure I'll be asleep on the couch anyway, trying to catch up on lost zzzzzzzzz's.