The Ghost Town of Redington

Some readers may remember when my friend Cyndae visited earlier this year ... we drove to Cascabel on the dirt road and were pointed to HER cemetery when we accidentally drove onto the wrong property.  If we had kept going (which we definitely should have done back then) we would have ended up at Redington Pass, making a big loop back to Tucson.

My thought, after looking at the map with the big state highway noted on it, was to drive the route the other way.  Off I went to the little ghost town.

This road, squeezed between the Rincon Mountains and the Santa Catalinas was a stage coach and later military road.  This region is pretty isolated and soon became a haven for outlaws.  When the Kinnear & Company stagecoach was robbed and two men killed just outside Tucson, Wyatt Earp was hot on their trail.  It lead straight to the Redfield Ranch over the pass.

On my little jaunt going up the hill, I wasn't able to take ANY pictures.  The road is narrow, steep and there is no place to park.  So here I am at the second parking area going up the now gravel road.  If you keep going, there are no places to turn around. 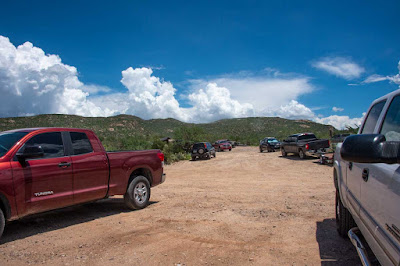 There were so may cars parked at the first lot, I barely got through the tangle.  Not only is this a haven for hiking, but off road vehicles.  In fact, hiking can be dangerous with motorcycles whizzing by you every few seconds.
Depending on who you believe, either Wyatt Earp and his posse or Sheriff A. J. Doran followed the tracks straight to the Triangle Dot cattle ranch where one perpetrator was arrested.  The rest of the bad guys escaped.  At the time, some suspected Doc Holiday was involved, but he was never arrested. 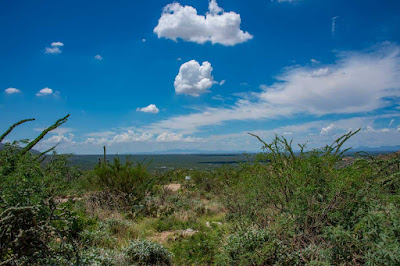 In 1883, a stagecoach bound for Globe from Florence was robbed of gold and the stagecoach guard killed.  The Sheriff's posse, aided by witnesses, again ended up at Redfield Ranch where they found Lem Redfield and Joe Tuttle.  Apparently they looked guilty enough and some evidence (a mail bag) was found, so they were arrested. 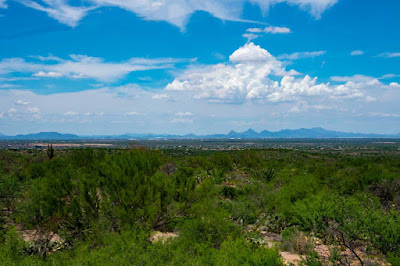 I didn't get very far up the road, which was pretty narrow as roads go, nor could I get past the group of ATV's and dirt bikes.  I asked a couple of kids how the road up the hill looked.  Not good they said, with the record setting rains we've had the last couple of weeks, the road is washed out in several sections.  Only ATV's and bikes were getting past the parking area where I was.  RATS ..... and so I began the steep narrow descent back to pavement. 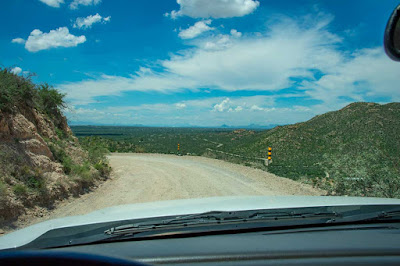 Talk of vigilante justice being imposed, Henry Redfield got a U.S. Marshal to go to Florence to grab his brother and move him to the safety of Phoenix.  Florence law enforcement challenged the Marshal's authority, giving the vigilantes time to do their dirty deed.  Lem and Joe were hanged. 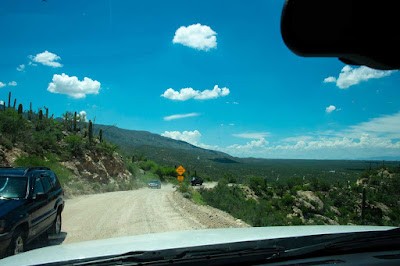 Soldiers went from Fort Lowell over this road on many missions to save the settlers from the Apache Indians who were raiding their farms.  Eventually the Indians left and the drunk cowboys took over.  Finally, due to drought and hard times, most of the farmers moved too.
The remaining Redfields relocated to Benson where Henry started a livery business.  In 1886 he died of an overdose of laudanum.  His son Leonard served as postmaster in Benson from 1896 to 1940, believed to be the longest term in U. S. history. 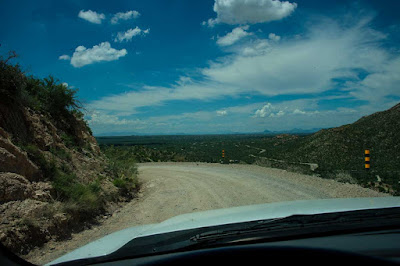 Slow is the name of the game here.  Hit your brakes too hard on that gravel road and you will skid right off the cliff.  Finally back on pavement, I'm one-handing the camera while trying to stay in my lane.  Oh yeah .... it's VERY narrow with a cliff over that railing.  Click click. 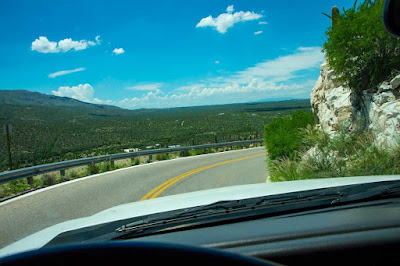 William Bayless from Tucson began to buy up all the Redington land he could find at bargain prices, creating the 200,000 acre Carlink Ranch.  Gradually, the road fell into such disrepair that it could not be used. 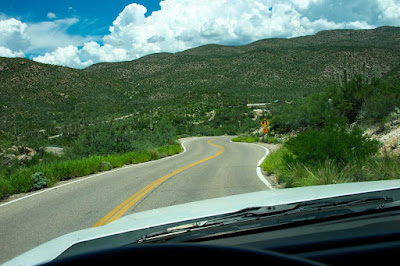 In 1932 a group of men, paid from the Reconstruction Finance Corporation funds lent to Tucson, finally made the road what it is today.  It's still gravel and not hardly passable in this rainy-washout weather.  Maybe it will be repaired again and I can drive to the actual ghost town of Redington. 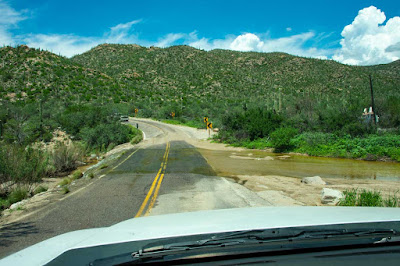 Tanque Verde Creek crosses the road and heads down the way. 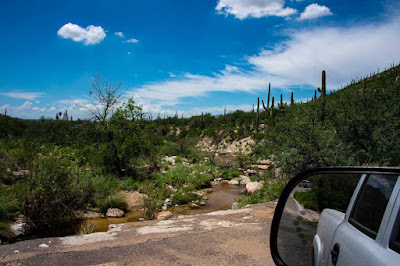 Not my picture, but a better look at the creek.  It is definitely beautiful up there, perfect for an afternoon drive and picnic.  I would advise you definitely go during the week.  The Sunday traffic was pretty crazy, making it difficult to get turned around. 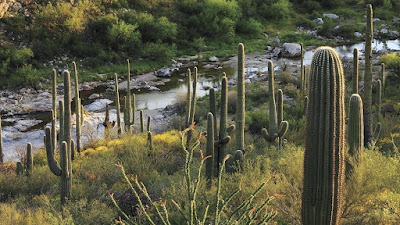 Famous last words ..... I will be BACK ..... when they fix the road up a tad.  After all, who wouldn't want to follow in the footsteps of Wyatt Earp and the bad guys!!!