Mexican Drugs ... Do They Work?

As you know, I went to the Doctor back in January for suspected high blood pressure.  Turns out my blood pressure was just fine, but they didn't like my cholesterol numbers.  I'm sorry I can't demystify all that.  There's good and bad, along with a whole bunch of numbers that are just that ... NUMBERS ... to me. 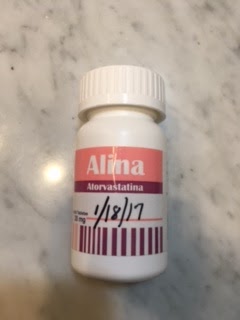 So the good Doctor gave me a prescription for atorvastatin (generic for Lipitor) to get my numbers down.  That's the one I had filled at Walgreens for a ridiculous $175.00 for 90 pills.   Never EVER go to Walgreens.  What do you think they do with all that money??  I found out later, Costco had the same thing for $32.00.

As soon as I hit Yuma mid January, the Chance family and I made a beeline for Los Algodones.  I think I reported the cost to be $13.99 for 100 pills.  I've been taking only those ever since, knowing I would return to the Doctor for blood tests to see if they were working.

Yesterday was the day to hear the results.  Unfortunately, it didn't go as smooth as I expected.  My appointment was for 10:30 and I arrived right on time.  I was immediately taken to the back parking lot ... a row of chairs down the hallway ... where I was parked with two other people.

I watched the Doctor come and go from the rooms.  An hour went by and no one moved.  Finally, one room opened up for the guy sitting next to me.  I tried to be patient as I then saw TWO empty rooms and I was still sitting in the hallway.  FINALLY I got to Room 5, where I waited ......... and waited some more.

You know me ... after an hour and forty five minutes, I was getting pretty hot under the collar.  This is ridiculous.  I can actually hear all the Doctor's conversations through the paper thin walls and they were NOT all business.

At the two hour mark, I opened the door and yelled for a Nurse.  I've been sitting here TWO hours.  She checks the rooms ... you have three people ahead of you.  NO I DON'T!!!  I SHOULD HAVE BEEN SEEN TWO ROOMS AGO!!!  She checks again .... OH she says.  The good Doctor had skipped my room for whatever reason, and was already going around to see people who had come in an hour AFTER me.

I stood in the doorway with arms folded ..... waiting.  He finally came out of a room and I accosted him.  "How are you?" he asked.  I'M PISSED ... I'M MAD ... I've been sitting here for TWO HOURS.  Well we do have emergencies ... NO YOU DIDN'T HAVE ANY EMERGENCIES because I can hear every conversation!!

Don't put up with this people ... get in their face.  There's absolutely NO excuse unless the Doctor himself had a heart attack.  He apologized several times.  My response was lets just get this blood test thing over with so I can go apologize for missing MY next appointment.

Really, I don't go off on people very often, but this office needed to hear it!!  He did a quick exam, NOT including my blood pressure at my suggestion because it was through the roof, then gave me the test results.

SO .... here it is!!  There's good and bad cholesterol.  All my GOOD numbers were quite a bit ABOVE normal.  YAY!!!  My BAD numbers went from 294 down to 220 in 75 days of taking the meds from Mexico.  I never did take the drugs from my pharmacy because I wanted to see if the Mexican drugs worked.

I'm here to tell you they DO work and very well according to the Doctor.  Here's the thing though, you really must go to a legitimate pharmacy ... like the Purple Pharmacy in Algodones.  Don't go buying them off some guy on the street corner because they are cheaper.  I imagine you will get sugar pills.   Always check the expiration date.  Since I buy one year's worth, I want to be sure they will last that long.  Write the purchase date on the bottle like I did above so you know exactly when you purchased them.

You do not need a prescription unless you are trying to get heavy duty stuff like Valium, Codeine, Hydrocodone, Demerol, Vicodin ... those kinds of drugs.   For the difference in price, it was well worth the trip for me.

For the record, I know Doctors need to talk to some people much longer than others ... and I don't mind waiting up to an hour ... but when I hear talk of golf games with a total disregard for the clock when ten more patients are waiting, I get pretty irritated.  I'm guessing next time I won't be left in the hallway OR the room ... I don't think they want that loud unruly patient spouting off for everyone to hear.   Sometimes you just have to stand up and be heard.

Posted by Nancy Kissack at 7:32 AM