UGH ... I have been notified that the Magic Kingdom of Bingo wants to take advantage of the local High School Bingo closure and open for a second night during the week.  That means TWICE the contact with the peasants and the moneychanger.  Of course on the good side, that means TWICE the contact with Prince Charming, the Castle Lawyer and the Knights of the Roundtable!!  That may not be so bad after all!!! 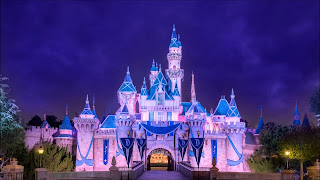 In the meantime, the more I think about the cholesterol busting drugs, the more it bothers me.  In the dark ages, I never thought about it ... just give me something to make me feel better!!  There's always good and bad about every drug I suppose, but this one needs a little more investigation.

I know you can lower your cholesterol with exercise and diet.  I exercised the heck out of myself for over 30 years by running about every other day.  There were lots of marathons (26.2 milers), half marathons (13.1 .. go figure) and 10-20 mile runs to keep in shape.  Apparently that worked for me really well because when I stopped, I began to fall apart.

Running takes up LOTS of time ... at the least, about two hours a day.  At the most, up to SIX hours.  I wasn't the speediest in the group.  After all those years, it was really nice to just sit on the couch.  Unfortunately, that precipitated twenty pounds and a jump in my cholesterol, partly due to the fact I made homemade ice cream every week.

For awhile there, it was nice to have the "live life to the fullest" attitude ... if you want that ice cream, EAT IT!!!  Now however, without the exercise and WITH the desire to live longer, I have to watch the food I eat a LOT more.

I don't eat much beef normally, but with the Instant Pot, it's been on the menu.  From now on I'll stick to chicken, turkey and fish.  I quit the ice cream cold turkey mid January ... kind of.  Okay, April Fools, I quit in January except for those two Freddy's custards I downed in Tucson.

Now that my numbers are down, in spite of the Doctor telling me to keep taking the pills for the next five months, I'm going to cut them in half.  If in 75 days the numbers have gone from 294 to 220, with under 200 being the goal, seems to me I can slow the pace a little and still make the goal line.

In the meantime, I again prepared dinner for the overseer of my house and alarm, the Retired Police Officer.  Too bad I didn't take pictures, as it was one of the better meals I have fixed.  I defrosted a couple of those Ugly Steaks from Dickman's Meat and Deli in Tucson and forced him to barbecue them, just to be sure they were edible.  That was almost a disaster, as I had earlier taken the cover off the barbecue, which turned the knob just enough to let all the gas out of the canister.

I smelled it immediately upon opening the door to the patio.  YIKES!!  GAS!!!  It's a good thing I had another canister, because that one was empty!!  Lucky too that the wind was blowing like crazy and cleared it all out.  Here's the leftovers!! 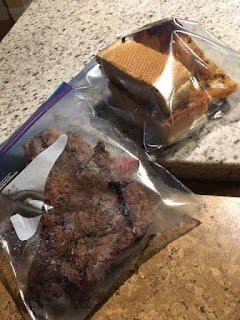 I made instant pot green beans ... WOW!!!  I've never been able to cook green beans right.  They came out PERFECT!!!  I put them in a wire basket and set the steam function to two minutes.  I cooked the bacon and onions separately, then stirred them together.  What cholesterol??  That's a VEGETABLE!!! 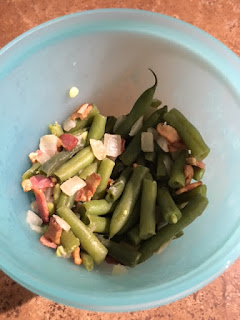 Next up, I cooked a little caramel for the bottom of six small dishes and used 2% milk to make FLAN ... that wonderful Mexican dessert I LOVE!!  In the interest of honesty, I did stir in a cup of cream, but that came out to a tad more than one ounce per cup.  It was one of the best I've ever had.  This Instant Pot is a keeper!! 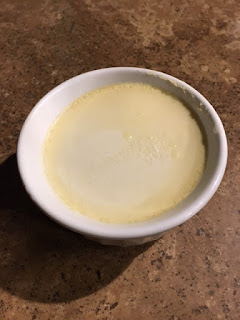 I also whipped up some garlic bread in the tradition taught to me by the wonderful Chef Miss Terry.  Cook the garlic in melted butter, then spread on the bread and broil till brown.  I almost broiled it a tad too much, but saved it in the knick of time!!   Nothing has gone into the cemetery in quite some time, which worries me.  I'm due for that disaster any time now!!

By the way .... APRIL FOOLS ... there will be no second day for the Magic Kingdom.  If there was, I think I would have to sail away on the first ship back to England!!