As you can imagine, spending $200 to fix my brake lights is not something I relish doing.  I've saving every penny for furniture at the new house in Arizona ... whenever that happens.  So for the second time, I've broken in to the taillight section to see if I can figure out what the problem is.

I unhooked the tailgate cable in order to be able to set the unit down, then began pulling out the bulb attachments.  It was delicate work ... trying not to squash the bulbs in my fingers as I wiggled them out.

It took me an hour to find the Strikehold bottle.  That's the stuff you can use on electrical connections to get them to working again.  I looked everywhere, high and low, singing my little Saint Anthony song.  Where in the world did I put you??  After digging through every compartment under the rig and every drawer inside, I had decided I would just order another bottle when MY lightbulb went on. It was under the kitchen sink ... don't ask me why because I have no clue!!

After carefully cleaning each bulb, I put it all back together.  STILL nothing.  My surgical skills need some work.  For the fourth time, I took it apart to finally discover the bulb was burned out.  RATS!!  Now I'm wondering if something I did caused it to blow!!  Today I'll pick up six more ... just in case they ALL go out and attempt surgery again tomorrow!! 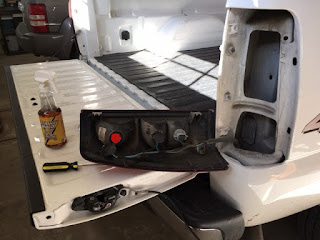 In the meantime, I might as well check the lights on the Jeep.  With no way to do it alone, I called up my trusty receiver to replace my foot.  They seem to be working fine, although someone at the fairgrounds in Arizona told me I had no right brake lights when I was hooked up.  I really don't want to go there.   I had that problem before when the entire connection was ripped apart while traversing a driveway somewhere in Timbuktu Kansas or Missouri ... I can see it in my head, but have no idea where I was.  At any rate, next time I hook up, I've got to check THAT out too!! 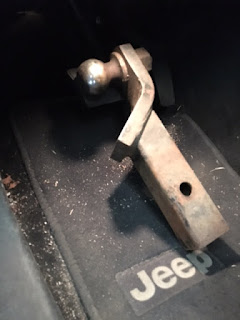 Here's a little something I came across the other day ... If you don't have a cake pan, or in this case a cheesecake pan, just turn one of your food containers upside down.  Lock and Lock Salad Bowls seem to work the best, but this wasn't bad either.  I turned the lid upside down, put the cheesecake on it, covered it with the bottom and pressed it to seal. 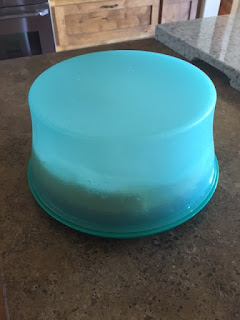 It worked perfectly ... the cheesecake is now in the freezer where I won't bother it quite so often.  This would work for any kind of cake ... just don't cut the lid when serving.  I left the removable bottom of the cheesecake pan underneath to make it easier to cut. 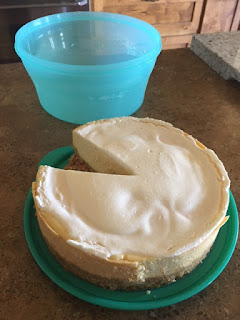 The rest of the day was pretty ordinary.  While looking for the Strikehold, I discovered three huge tablecloths covered in grease and pancake batter from the Indio Rally.  I basically soaked them in Spray N Wash, then put them on the toughest setting to wash.    Hope springs eternal they will be clean enough to use again.  If not, I'll just get some plastic flowers to cover the grease spots!!

In the meantime, I spent some time sewing the latest kids quilt.  I'd show you a picture, but it's not my favorite.  Maybe once I get it on the wall and come up with a pattern I like.  I mistakenly used the outside trim on the inside pieces, meaning I have to find more outside trim.  Sometimes my sewing skills match my cooking skills.

It's Magic Kingdom night so I'm donning my armor and loading up my sword, mace and shield to fight off the peasants, not to mention the Moneychanger.  Maybe a little cheesecake for sustenance will help!!