Springtime is the time for new babies.  On the ranch, we spent many hours riding through the herd of cattle looking for cows who were calving.  When those calves hit the ground, they were worth a lot of blood, sweat and tears, not to mention dollar signs.   We spent a lot of time making sure they were A-okay.  There's nothing cuter than a baby calf.  Well maybe a baby giraffe!!

Back in New York, there's a new baby being born as I type.  April the giraffe shown here, has been on everyone's radar for the last two months.  I'm not sure if they guessed the date wrong or not, but people have been watching April "live" ever since the Vets told people she was going to have her baby any time (which was two months ago).  I was lucky ... I just clocked in last night and this morning there was BABY ... almost anyway!!

She's still in labor, but don't worry, I won't show you any graphic pictures.  Everyone is pretty excited, including her paddock-mate/hubby next door. 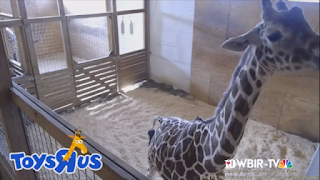 While I watched the Giants WIN last night's game against the Colorado Rockies, I finished up this needlepoint canvas.  Now to find someone to mat and frame it ... which will probably end up being me.  Needlepoint is fast becoming a lost art.  The last two shops I could buy canvas and thread from (a mere 2-1/5 hours drive) have closed.  It's a sign of the times I suppose, but I'm sure going to miss it!!  That is when I finish the last four canvases I have .... which should be in about ten years!! 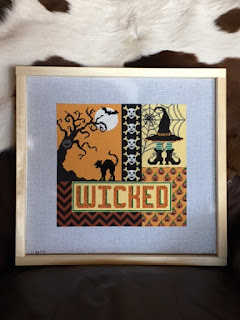 AND WE HAVE A NEW BABY GIRAFFE!!!!  Congratulations April!!!  150 lbs of baby, born at 6:56 California time.  Baby is already holding it's head up and moving it's legs around.  Proud dad is running circles in the paddock next door. 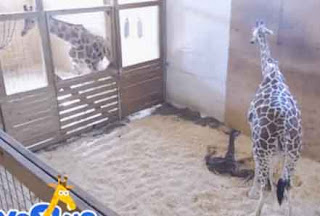 Another Halloween project ... I just LOVE Halloween!!  This was all done on my new embroidery machine.  It's a learn as you go process.  The batting I used is WAY too thick, make the panels stiff as a board.   Now that the sections are sewn together, I'll add black borders for my first embroidery masterpiece.  Nope ... no idea where I'm going to hang it.  It's not exactly COWBOY!! 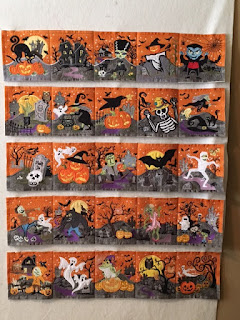 In an effort not to be wasteful ... I mean really, what can you do with a leftover cup of cream ... I whipped up another 15 minute batch of Instant Pot flan.  Made with 1% milk this time and the leftover cream, it can't be all THAT bad calorie-wise.   I can tell you it's DELICIOUS!! 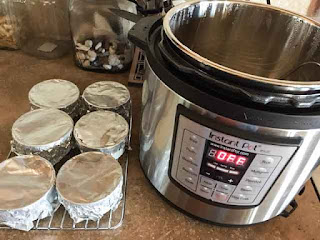 It's good to have a success just before cooking an Easter ham.  Not really "cooking" but heating with lots of goodies to give it more flavor ... like pineapple, cloves or whatever you are supposed to use.  I haven't gotten that far yet, so I better get my act together!!  The cowboy green beans with bacon and onions will be a snap in my Instant Pot.

Baby (I just can't stop watching) in twenty minutes, has control of his/her neck and is trying to stand up.  That's a pretty amazing feat when you've got three-foot long legs.  You just want to stick your hand under it's belly and help just a tad.  I'll have pictures for you tomorrow!  It's as cute as a button!!