Who You Gonna Call???

It's too bad there aren't any ghostbusters around because I sure could use one.   My electric bill has been extraordinarily high the last two months when it usually runs around $90.  Sometimes it's just not worth the effort or the stress to figure it all out, so I just pay the bill and go on about my way.

Yesterday when I checked on-line for my last months bill, I discovered it was THREE times the normal. I got angry because I do so MUCH to keep my bill low.   I have not been using lights, and I haven't used my ovens, my air conditioning or my heating AT ALL.  It was time to become a PG&E-buster and find out what's going on.

There's absolutely no use calling them ... their answer is so sorry charlie ... your meter says you used it, you pay for it.     Good 'ole PG&E ... who now advertises about how they killed people in the San Bruno gas pipe explosion because of their negligence ... "but we're fixing it".  Yup ... that's their local advertisement.

Anyway, I checked out everything I could think of when I finally got to the sprinklers.  They run more than anything around here.   Although the gardeners are supposed to keep an eye on them, as in check them at least once a month to make sure they are working, they have a 90 year old's memory.  I suppose that has something to do with me throwing a fit about the Roundup-dead plants.

I know you're as tired of hearing me complain about my gardeners as I am.  Originally DAD took care of the yard and kept everything up ... a real conscientious guy.  When his son took over,  the quality went downhill.  Mow and blow as they say, and gone with the wind.

At any rate, I noticed a sprinkler head that was broken off about three months ago.  I asked him to replace it.  Of course he didn't have any extras, but promised he would get it fixed. 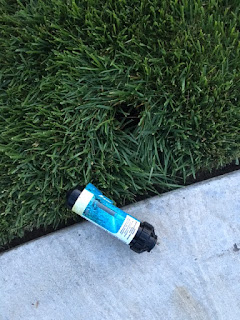 With my ghostbuster hat on, I decided to check the sprinkler timer.  Maybe something was up with that.  Nope ... it all looked fine.  Seeing the grass getting dry, I decided to run all the stations and double check their output.  Wasn't I surprised when I discovered a fountain in the front yard running water like a river down the driveway.

Buried deep in the grass was the broken sprinkler head I asked him to replace three months ago.  THREE MONTHS this thing has been pouring water down the drain and running my pump motor hour after hour while I was in Arizona.  Ghost BUSTED!!  Now of course, I'm turning red around the ears as steam pours off the top of my head!!   Nancy is NOT a happy camper!!

I called the DAD really early yesterday ... I have him on speed dial ... but nothing has been repaired as of yet.  There are also two leaking main valves that require repair, which he promised to fix two weeks ago.    I suppose part of it is on me ... I should be checking them constantly and not rely on anyone else.

The trouble is, who am I gonna call?  I've gone through just about every yard service in town that I can afford.  I've come to the conclusion it's time to cut back on grass and plant concrete.  I've turned the sprinklers OFF and deposited my ghostbuster hat in the closet.  Case closed ..... for now.  I'm willing to bet my PG&E bill will be MUCH lower next month.  Thank you for letting me rant!!!

On a happier note, I signed a contract on the house in Arizona and sent my deposit check.  Assuming all the inspections are good, it should close on or about May 17th.  YAY!!!!!

Now where did I leave the phone number for my concrete guy???