I haven't been taking my camera with me lately ... shame on me!!  I did remember it on my trip over the hill to Gilroy and Morgan Hill, but only after driving five miles down the road.  That's usually enough for me to say forget it ... but this time I went back.  California is gorgeous in the springtime.

As you drive up over the Diablo Mountains between the Santa Clara Valley and our Central Valley, you can see nothing but green.  In the olden days, back when I was a kid (not really), it was the site of a stage station on the Butterfield Overland stagecoach mail route.  It connected St. Louis Missouri with San Francisco and quickly became known as Robbers Pass. 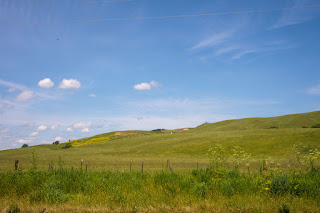 On this particular day, the clouds looked like they were playing tic tac toe.  The Yokut Indians were the first to use this trail to traverse the mountains and trade with the coastal tribes.  It's a beautiful area, but unfortunately there aren't many turnouts where you can stop and enjoy the view.  In fact, there are none.  I stopped in a big driveway with no parking signs every ten feet. 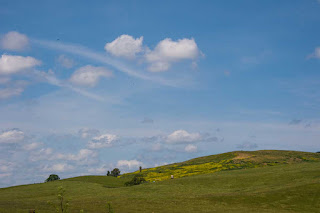 It's more well known name of Pacheco Pass was for Francisco Pacheco who owned 35,000 acres of Mexican Land Grants, but people knew it as Robbers Pass because of all the holdups that took place there.   There was only one route over the hills in central California, so it was the perfect setup for bad guys looking to garner a few bucks without working for it.

Seems kind of weird, but on the Eastern side of the Diablo mountains there is a huge dam creating the San Luis Reservoir.  It's an artificial lake and stores water taken from the Sacramento River Delta.  Water comes from the California Aqueduct system, is pumped UPHILL into the lake, then is released back DOWN into the forebay where it continues on south for irrigation and "other purposes" meaning water for the Los Angeles area.  This is the first time it has been full in many years. 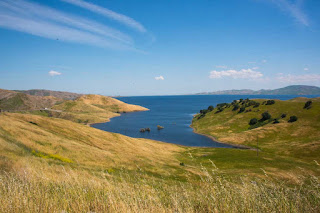 Although it is a recreation area for boaters and fishermen, it is notoriously windy and has caused many deaths from overturned boats.  I caught my biggest fish ever at this location. 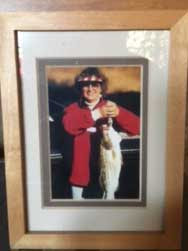 At any rate, on the way back I didn't see any robbers, but I did see lots of water in the San Luis Wildlife area.  Water from the San Joaquin River spreads out on this flood plain (that is when there IS water) as far as the eye can see, making it a perfect habitat for ducks and all water critters. 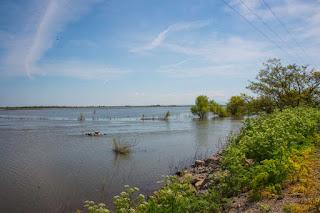 There's no place to stop along this highway either.  You would think they could widen the road a little, but apparently they don't want visitors.  I stopped by a bridge in a spot barely wide enough for my truck and left my flashers on just long enough to get this pictures of the ducks scurrying away. 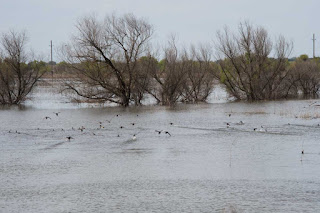 As you get closer to the river proper, there is a large parking area, completely flooded.  If you're brave, you can tempt fate and try to cross over to it.  I didn't stay too long ... there were a couple of fishermen just a little too close for comfort. 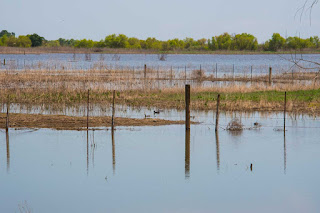 It really is a beautiful area, whether in the spring when everything is green, or in the summer when the hills look like velvet from the brown summer grass.  Take someone with you for pictures because you're going to want to keep your eyes on the road.

This is a major truck corridor to the Bay Area, along with tons of people who are in a BIG hurry on a  narrow and steep highway, making it a rather dangerous ride.  I can't believe we rode Pacheco Pass on our motorcycles back in the old days and lived to tell the story.    Someone was definitely looking out for us on Robbers Pass.