Well RATS!!  Turns out the April Fools joke was on ME!!   Not the Bingo night, but the not-so-delicious dinner I cooked in the Instant Pot.

Truth be told, it was just leftovers in the first place.  What in the world made me think I could make that into something delicious ... from scratch ... without a recipe is beyond me.  Chef Patty does it all the time, but unfortunately, no matter how long I stay at their place in Arizona, it hasn't rubbed off on me.

Leftover steak, broccoli and some ingredients to make a sauce ... how hard could THAT be??  Since the beef was already cooked, all it needed was a couple of minutes for the broccoli.  Recipes I found said 1-2 minutes.

When it was done, I let it sit for two minutes, then released the steam under my hood vent on the stove.  In case you have an Instant Pot, releasing all that steam underneath your cabinets will result in damaged paint and wood.  I know that because I had a rental once where the cabinet actually had to be replaced just from a slow cooker.

At any rate, it looked delicious and I was pretty happy with myself.  I mixed up a quick slurry to thicken the sauce a little and stirred it in.  I was magic I tell you ... MAGIC!!  The broccoli instantly disappeared.  I mean you couldn't see one tiny piece of green in the entire pot.  It was so overcooked it immediately dissolved into the sauce.  Well for heaven's sake!!!  I ate it none the less, but only because I didn't want to admit I buried all that leftover ugly steak I made it with.

My record is intact ... no Instant Pot meals in the cemetery, but it was a close one to be sure!!  Next time I will look up and FOLLOW a recipe.  This is the BEFORE slurry picture. 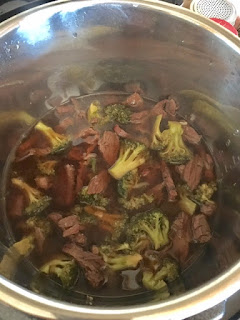 The rest of my day was spent trying to figure out the lights on my truck.  Remember some homeless looking guy followed me into a parking lot and told me my brake lights were out?  Not that I didn't trust him, but the next day when I went for groceries, there happened to be a fire truck in the parking lot.  I walked up to the door and asked the nice guy to check my brakes for me, which he obligingly did.  No brakes on the right side.  Okay then ... time for a fix.

In talking to one of the Knights of the Round Table, he suggested I could fix it myself.  Many times it's just a loose connection, like all those running lights you see on Chevy trucks where just ONE is lit up??  Really??  I think I paid $200 to get both of my front light bulbs replaced about three years ago.  I was expecting the same here.  If it's just a loose connection, why I can fix THAT!!

I dropped the tailgate and took out two screws, whereupon the light fixture fell out into my hands.  I saw three big knobs which I assumed held the lightbulbs.  I twisted them off one by one and took a good look at the bulbs.  All three appeared to be intact.  I gave them a shove just to be sure they were making contact.  None seemed to be loose, so I put it all back together.

Now ... how do I check them?  I stuck the key in the ignition and turned it on, then wedged a dutch oven lid over the brakes so they would be ON.  I ran to the back of the truck expecting to see nothing, since it seemed I did nothing to fix it.  EUREKA!!  I had brake lights!!!  I'm not sure how long they will last, but hopefully for another twelve years, which is how old the truck is now!! 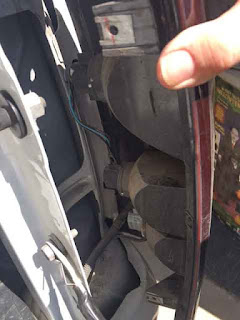 I'm off bright and early this morning for an Elks Park Pancake Breakfast where I'll cut and chop fruit (I'm taking my own knife this time since their's will hardly cut a ripe peach) and snack on link sausages because they just taste so darn good!!  Oh shoot .. I forgot about the diet AND the cholesterol.  Okay, I'll snack on fruit instead.

After that, I'm starting work on a new quilt.  In between I've got a new backpack sprayer to help keep the weeds down.  Hopefully there is a LOT of wind that will carry the spray all over my neighbor's trees so I won't have to pay $300 a year to get them trimmed up on my side of the fence.

Posted by Nancy Kissack at 6:12 AM