Don't you just hate it when you make an appointment and no one shows up?    Nick and Terry Russell have been having the same problem on the EAST Coast.  It's SO frustrating!  Not that I have a lot of other stuff to do anyway, but I COULD have stayed in my jammys all day.

Since the light show at my house was scheduled for 5:30, I had all day to wander from one corner of the house to another.  That's when I discovered I'm almost out of bird biscuits for His Highness Jonathan, who gets waited on hand and foot.  I don't mind baking them at all, but when it comes to cleaning this pan, it's a bugger!!

No matter how much I spray it, which can't be too much because oil is not good for birds, stuff sticks to the bottom of each and every muffin hole.  That doesn't matter though .... Jonathan has lived 45 years because of good care ... I can't stop now!  That's just crazy when you think about it!! 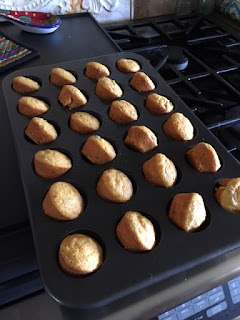 Since I can never find anything to wear in my closet, I thought some Spring Cleaning might be in order.  SO MANY CLOTHES!!  I'm a keeper ... I've been keeping some clothes for over 35 years.  You know, things always come back in style.  I have some pretty cool outfits I'm keeping around for just that day.  Things like my motorcycle jackets, leather pants, three micro-mini bikinis and several pairs of sexy lingerie.  The problem is that I can't even BEGIN to get any of them on!!

I have several long formal dresses with no place to wear them, four ski parkas worthy of Alaska mid winter and eight mini skirts that haven't seen the light of day since I found I could get away with wearing levis to work.   I found 25 running shirts along with 8 jackets (depending on whether I was running in the rain or not) that made me look like a donut wrapped in spandex when I tried them on.

As you can see by the hangars, I got rid of quite a few.  You would think this would free up LOTS of closet space.  Well, you're looking at it. 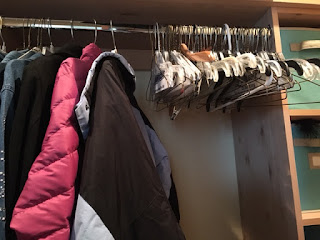 With one red wool coat exception that I couldn't even get one arm in the sleeve, three of these bags were squished into that space.   It's hard to let go.  I blame it all on my mother who even saved her used pieces of aluminum foil.  I might need these clothes one day.  You never know when I will magically lose 30 pounds and they will all FIT perfectly again!!! 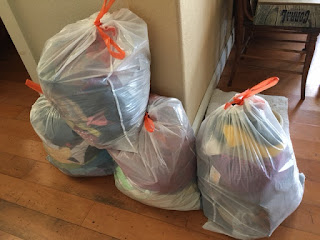 To be honest, one bag isn't as full as the others ... it has four pair of tall boots with five inch high heels.  Yes, I can still get those on, but they do tend to make it a tad hard to walk.  In between, I was able to let loose of four pair of extremely well worn running shoes.  Yuck ... who wants those???  The baseball caps went too, except for the one from New York, two from Barry Bonds and five from the Giants baseball team.  I don't even WEAR baseball caps.

By then it was close to 5:00, so I ate quickly with the expectation of hearing a knock at the door.  Nothing.  By 5:45 I was looking out the windows waiting for the trucks to drive up.  Nothing.  By 6:30 I changed clothes and parked myself on the couch, ready to watch the baseball game.  I don't know why, because I think the Giants have only won one game so far this year.

It's okay the gardeners were a no-show.  I didn't need more lights anyway and it just saved me the stress of telling them no.  Now of course I will stress over him showing up unannounced in the next few days.

Today I'm off to run errands and get groceries ..... and maybe I'll take another quick look at my closet.