Due to the joys of home ownership, I had a few repairs to make yesterday, including getting the sprinkler valves fixed so I could get rid of the swimming pool of water in my flower beds.  Since this has gone on for three days now with the drip becoming a full blown faucet, I AGAIN called the landscape guy with my "not too happy about a two hour wait at the Doctor's office" voice.  He came right over. 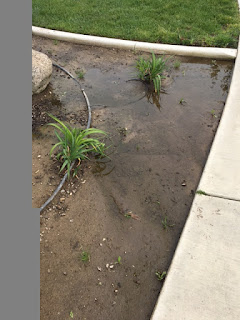 The two new valves are glued in place, four inches below the others, which I'm sure will also start leaking soon.  Do you think it's the sun?  Maybe I need to keep these guys covered.  I've had the same problems over and over with the three sets around the property.  Once the water receded I replaced four of the drip irrigation doodads that were missing.  In spite of my pleading for the lawn crew to NOT weed-eat them to pieces, it continues to happen.  Yes there are other lawn services, some more expensive and some worse when it comes to care.  Remember where I live!! 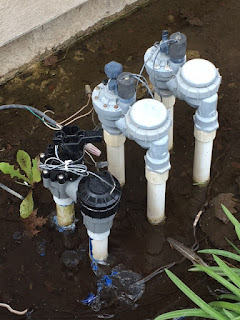 After pulling a few weeds and spraying half the horse corral, I settled into a little sewing before my haircut appointment.  I loved this quilt but I hated the pattern. 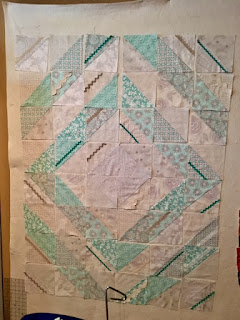 I finally moved every square around, in spite of having spent an hour on the above arrangement.  It's funny how different it can look.  I'll let this sit for awhile while my brain mulls it over. 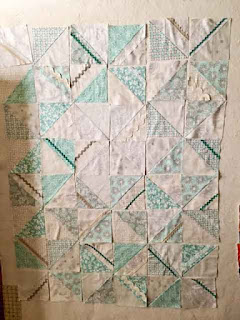 On the way back from town, I stopped in at the GMC store for light bulbs.  I probably could have gone somewhere cheaper, but then I risk the chance they don't fit, requiring a drive all the way back to town.  They were $3 each.  I only got two because that's all they had.  At first I wasn't sure they were going to fit.  It took some doing to get them pushed in without breaking the glass.  At long last ... let there be light!!!!  I FIXED IT!!!!   Now I know just how much that dealership ripped me off when they replaced the two lights up front for $200.  Good grief!!! 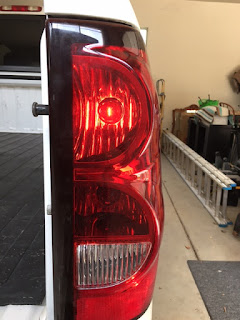 Winner winner!!!  This chicken dinner was AMAZING!!  Maybe I just don't get out to restaurants enough to have good food.  So simple this recipe, but so tasty!!  Sprinkle chicken with smoked paprika, salt and pepper and brown in a tablespoon of butter.  Take it out of the pot.  Mince and lightly cook 3 cloves of garlic, followed by one cup chicken broth, a half cup cream, a quarter cup parmesan, the juice of half a lemon and one teaspoon thyme.  Put the chicken back in and either Instant Pot it for 10 minutes, or simmer in your frying pan until done.  Thicken sauce with a little cornstarch slurry and serve over rice.  I'm thinking it was the smoked paprika!!! 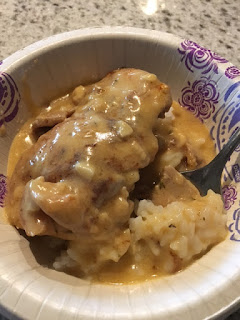 In between watching the Giants Baseball game which I wish I had NOT seen (they lost again), I spent an hour fixing my Thousand Trails reservations for this summer.  I discovered I had the wrong dates on two fronts, which sent me into a frenzy of scheduling.  I'm still not sure I have it right, but have to wait a few more days before acquiring the last and most important one ... for the Kite Festival.