The first stop yesterday in the hectic life of a Golden Spike member was the California Automobile Museum.  Ever heard of it?  Me neither, so I was pretty excited when we headed off to our first tour.  As is the case in most big cities, our RV accommodations are on the farthest side of the city.  I'm not the best at reading directions, and my Jeep does NOT have GPS.

After many turns and a long section of freeway followed by many MORE turns, I amazingly arrived at the destination.  I was not so lucky later on.  Although there weren't a lot of signs, I was pretty sure this was the place. 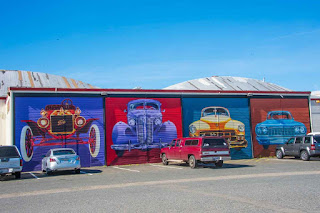 The wooden-built building is spectacular and BIG, with most all of the floor space full of amazing vehicles, from the very first Mercedes Benz to of Ford's first quadracycle.  On this particular week, they had a large presentation of old fire engines and horse drawn ladder wagons. 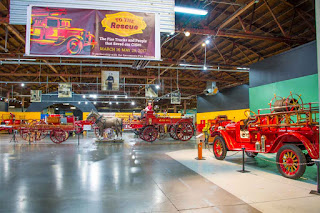 There was a story about how they came about, but it was a long one.  They started with a large collection of cars owned by an older gentleman who didn't like paying taxes.  He stored his cars here while in a court battle with the IRS, who I'm sure you know, won their case!!  IRS finally agreed to allow the cars to remain until most were eventually sold off.  From there, more people began showing up with cars to be on display and there you have it .... a car museum.

This is a beauty ... a 1904 Model B Touring which originally sold for $2,000.  With only 750 produced, they soon discontinued this first four cylinder car.  Only five remain in the world.  Please don't touch!!! 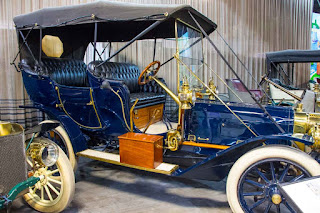 Much as I try to take pictures of the vehicle description, I missed this one.  I've really no idea what it is ... I can't pronounce it and I've never heard of it before.  I was distracted by our docents continuous conversation when all I wanted to do was look at the cars.  He corralled us like an old time cow poke, and despite our wanderings, cracked the whip like a pro ... a retired aircraft engineer I think he said. 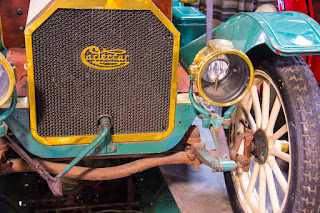 At any rate, some of the stories were interesting ... like the car belonging to Mr. Giannini, the Bank of Italy entrepreneur who kept his money hidden instead of at the bank when the big fire hit San Francisco.  That made it readily available when people were clamoring for cash to rebuild.  He obviously made a fortune and drove a very nice chocolate brown beauty!! 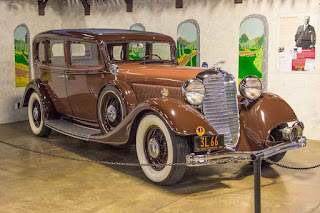 One of the first ever RV's ... a homemade crazy combination of cars ... was made by a test pilot with several engineering degrees.  An Oldsmobile Toronado front wheel drive, along with many parts and pieces, became a 1971 Star Streak motorhome. 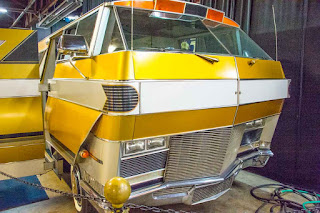 I'm not sure about his design ... the bathroom faces the only entrance door, with only a half wall between you and the outside world.  It was also the shower.  There's a fridge immediately to the left of the door frame, a double sink on one side and a stove on the other.  The entire rest of the rig is two big couches that make into a large bed.  Certainly not the RV's of today!! 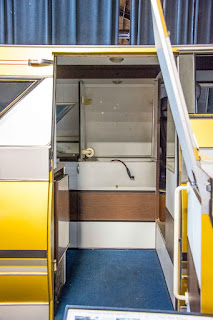 There were lots of 60's and 70's cars, including the GTO I drove as an 18 year old, a few race cars, Ricky Nelson's mustang and this not-so-beautiful beauty.  Can you guess what it is? 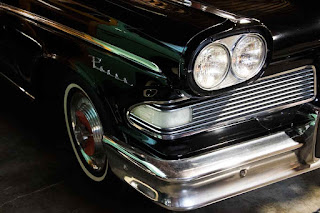 A black and red Edsel, now probably worth a fortune.  Hyped as the car of the future, it was deemed ugly and overpriced, becoming one of Ford's failures. 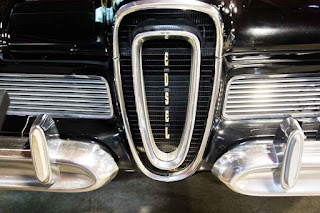 This gorgeous machine is definitely one I would take home.  An original Shelby Cobra worth a small fortune!!  There are many MANY more cars in the museum, a lot of which we didn't get to see because we were forced to listen to too many stories.    Don't get me wrong, he was a wonderful docent and very knowledgeable.  I guess we were just a rogue bunch of old folks who were more interested in the cars than most of the stories. 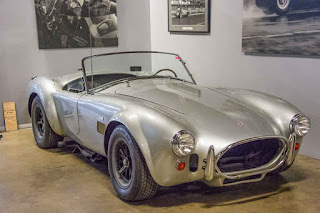 Almost two hours later, we gathered in the 60's diner for a lunch of sandwiches, chips and cookies before heading off to the California State Railroad Museum.   I made it to the museum with no problem, but had a little trouble getting back home.  Most everyone stayed in Old Town Sacramento for dinner, while I really needed to return to my puppies, it being three hours past their dinner and "go out" time.

Due to the mass of one way streets, crazy on ramps and no signage, I ended up in WEST Sacramento when no one would let me make that left turn.  It being 5:15 on a Friday night, didn't help.  One hour and twelve minutes later, I finally made the 20 minute trip back home.   PHEW!!!  I'm tired from all the walking yesterday, so I'm holding those train pictures for tomorrow morning.

We're off again early this morning to actually RIDE the train.  I wonder if there are still any train robbers around this part of the country?  Who knows, maybe we'll run into one or two.  I hope they aren't aircraft engineers!!