Gee .. I Never Expected THAT!!

Miracles always amaze me, especially when I receive them in my email box.  Not the 20 million dollars from the Nairobi Embassy or even the three free Southwest Airlines tickets I won yesterday.   We know those aren't real.  What I DID get was an email from American Airlines saying they had credited my card $20 for upgrading my seat.

That's about as weird as it gets because I changed from a tiny seat in the middle of the plane to a much larger, MUCH roomier EXTRA seat just behind First Class.  Just because I was so nice, they gave me $20 back.  I never expected that ... but I'm not one to look a gift horse in the mouth.  Thank you American Airlines!!  That makes sitting on the tarmac a little easier to take.

Here's a Google Earth image of the house in Arizona.  It's the one in the middle with the long driveway.  The house directly below in the picture is the location of most of the get-togethers.  You can see the train tracks making the curve which causes the trains to slow down.

Just to clarify, this will be a second home.  I just can't quite get up the wherewithal to sell my dream house here in California.  The thought of packing and moving EVERYTHING scares me to death.  Believe me, I've got a lot of crap ... I mean stuff!!  My plan is to start clearing things out, getting rid of all that junk I really never use, like lawn chairs for tanning (boy am I past THAT age) along with those six chairs I've stored for fifteen years now.

I figure in the next year or so I'll get it cleaned up pretty good for when California becomes a Sanctuary State and they institute their health care plan for everyone, meaning everyone who works will have their taxes raised yet again.  In that case my dream house may go down. 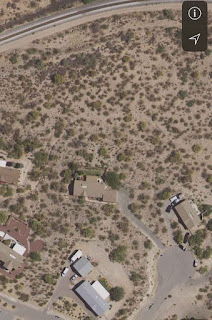 In the meantime, I've been coming up with any excuse to use my Instant Pot.  I'm telling you folks ... this is the best $99 investment I've made.  Yes, you can get them cheaper, but they are not THIS exact pot that does everything and is SO easy to use. 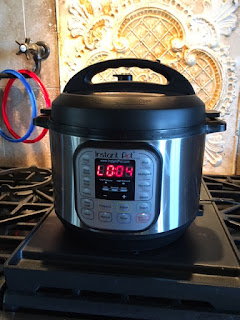 I whipped up another batch of chicken cacciatore ... I LOVE this stuff ... but unfortunately I didn't use the same recipe.  Although it's still good, this one does NOT have the flavor the other one does.  I deleted this recipe from my phone.  Still, it was tender and yummy over rice. 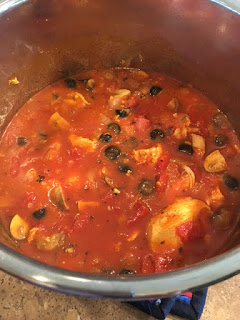 The only trouble is now I have even MORE time to twiddle my thumbs.  A thought jumped into my head.  That doesn't happen too often, so I decided to give it a shot.  How about my Grandmother's gingerbread!!  The old fashioned kind, with boiling water and molasses.  It came out wonderful, except for that part in the middle that didn't get done.  With my cooking record, I didn't expect EVERYTHING to come out perfect ... and it didn't.  The outside was WONDERFUL though!!    I wish I had applesauce, my Grandmother's traditional way of serving it, but all I could find was whipped cream. 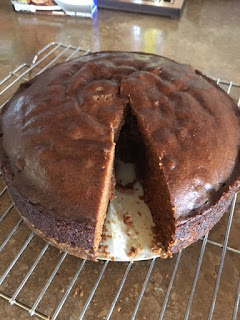 With both of THOSE done, I happened upon a recipe for FLAN.  I love flan, and a challenge, as you know.   In no time I had it mixed up and in bowls larger than the recipe called for.  It was a little dicey trying to get all of these on the trivet in the pot.  I just stacked them instead and hit the GO button.  Eight minutes later they were done and in the fridge.  I'll let you know how they came out tomorrow. 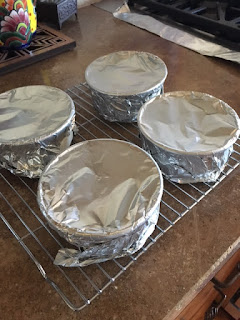 I spent the rest of the day starting to clean out the garage.  I'm serious about getting things in order.  My trash can was full in a flash.  It's going to be a long process.  What am I going to do with those Japanese dishes that are a hundred years old, not to mention all the storage boxes of Halloween decorations!!  Oh well .... little by little!!  I'm off to the Doctor for my blood results.  Wish me luck!!