The Test of My Self Control!!

So maybe it wasn't such a good idea to make those pumpkin spice cupcakes.  At first I just heard a quiet scratching noise coming from the kitchen.  The dogs could hear it ... they kept looking that direction.  The scratching turned into a whimper around noon and the dogs started barking.  By 2:30, they were screaming my name incessantly!!!  Four trips to the fridge resulted in two bottles of water and half an apple but my self control was fading FAST!!!  Just to show how desperate I was, I ate two more calcium chews!!!  At least I'll have strong bones to go with the pounds I will gain back!!! 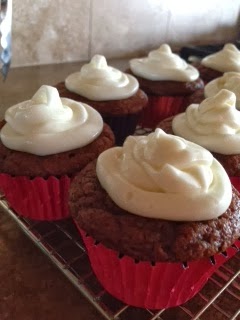 In the hopes of quieting the voices, I headed outside to play treasure hunt in my back yard, trying to locate the sprinklers that needed replacement.  Steak knife in hand, I stabbed at the grass getting all my aggressions out until I hit a hard spot ... the sprinkler head.  I dug up six!!  By the way, steak knives work really well for trimming away the grass around the edges.  Exercise worked for a couple of hours, but I knew I was still in trouble  ...  Nancy, we're here ... and we're sooo good!!

In a last ditch effort, I grabbed my clippers and gloves, heading for the overgrown rose bushes.  Did I mention these were supposed to be carpet roses??  You know, the kind that are only 18" high??  Trimming those would have been a breeze compared to these huge bushes, even larger since they were over-watered during my absence.  This is what I trimmed off ONE bush!!  Sorry Patty, they really needed a haircut!! 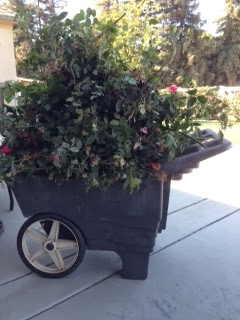 Three bushes later, I was feeling much better!!  The rest of the small one shown below is in the wheelbarrow above!!!  If I can't have carpet roses, I will settle for these, but the much smaller version on the right.  Only 6 bushes to go!!! 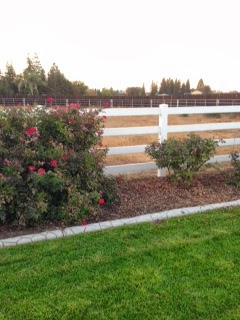 Now I'm stuck with disposing of huge piles of thorny, sticky branches ... but the roses look MUCH nicer.  Not only that, but my diet trick worked, at least temporarily.  My fingers were now so full of thorns and blisters, that holding a cupcake wouldn't be pain-free, and they remained in the fridge.

One more day of torturous cupcake voices and I will get a reprieve ... my friends are coming over with their two high school girls who will polish off these morsels of deliciousness in a flash, without the related weight gain!!

No word from the plumber, but if he comes by today, I'll try to ply him with pumpkin spice.  Maybe he'll fix my now leaky kitchen faucet for free ... you never know!!!!  Unfortunately for me, the test of my self control continues!!!