HaPpY bIrtHdaY tO YOU!!
hApPy BiRThDAy DeAR Daaannnnnnnnnn
HAPPY BIRTHDAY TO YOU!!!!!   And many many many more!!!

In case you didn't know, it's my friend Dan Chance's birthday ... hope you had a great one and ate LOTS of cake and ice cream!!!!  If not, hey ... there's always tomorrow to catch up!!!

So after that crazy obstruction call yesterday in the third world series game that ended with a St Louis Cardinals win (YAY!!), I thought I might sleep in on this Sunday morning.  No chance ... the dogs didn't care that I was up late (as they slept on the couch) and at their usual time of 5:30, they were up and at 'em!!!

I didn't think I had that much going on, but by 3:30, I was pretty tired!!  First up ... ride Showby again in my attempt to pump him up a little.  He's such a sweetheart, I don't even need the halter.  He will just stand there while I saddle him.  That saddle seems to be getting heavier and heavier when it comes to hefting it two feet over my head to get it in place on his back.  One of the things I will be looking for at the National Rodeo Finals in Las Vegas is an orthopedic blanket made specifically for older horses and maybe a ladder for me. 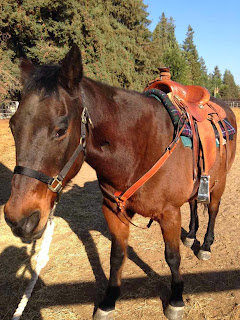 He doesn't look too excited about this!!  A few times around the corral and I headed out the concrete driveway to the road.  Once in the field, he stepped right out ... until he heard the dogs barking.  That made his head and ears perk up ... but we kept going, now at a slow trot.  What he would really like to do is just take off like a bat outta h-e-q-q ... until he realizes he's too old for that kind of stuff.  Surprisingly, he hasn't forgotten any of his training.  I can still move his feet anywhere I want, he gives to the bridle really well and backs up like a pro.  The turning is pretty hard on his arthritic shoulders, so I didn't go there.  Thirty minutes later, I headed back to the corrals.  No use making him too sore!!  It's like us old folks running a mile ... the next day we can't walk!!! 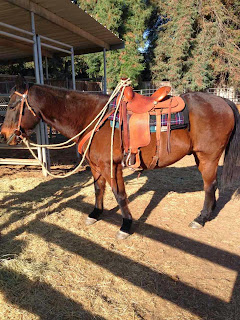 My friend Chris showed up with an empty cupcake can, which I promptly refilled and sent her on her way.  More cutting and sewing of the quilt until I had all these squares, ready to lay out in a pattern.  I couldn't quite figure out which way to place them.  Should be pretty easy, right???  I mean really, I have a picture to go by!!! 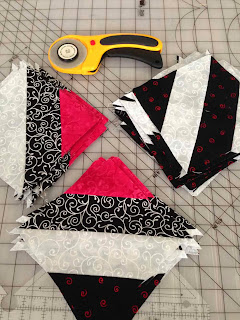 Finally the main design is down, ready to sew together.  After that, MORE sewing of the borders before transport to a "real" quilter who will stitch the three layers together ... top, batting and backing ... with a pretty design.  The final step will be adding the edging and my first quilt will be complete. 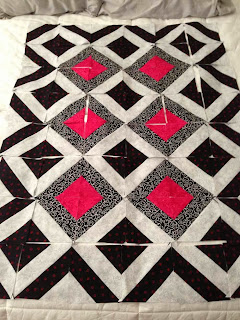 Between cutting, pressing, starching and sewing the quilt blocks, I cooked a Country Pot Roast in the oven ... again with the Dr. Pepper, can of crushed tomatoes in puree, carrots, onions and celery.  2-1/2 hours later it was Delicious with a capital D!!  On top of that, MORE cooking as I tried a test run of smoked turkey in my Bradley electric smoker.  The only prep here was laying on the spices the night before and letting it sit in the fridge ... then after sitting out for about 30 minutes, I started up the smoker, put in two 4 pound breasts and set the timer.  Four hours later it was turkey time!!  I have to admit this was not my favorite.  Even though I only had the smoke on for two hours, it was too much for my taste.  It was however, VERY moist and tender and will make great turkey sandwiches!!! 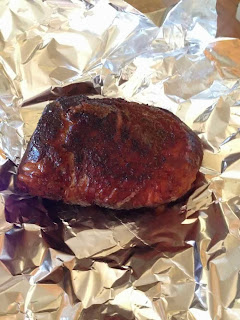 Now that I have enough food to last the week, it's time for the next World Series baseball game!!  Think of me tomorrow morning as you are having your coffee ... it's running day again and I'll be out early.  It's my excuse for eating those red velvet cupcakes with buttercream frosting ... it's okay, I'll run it off!!!