As I mentioned previously, John Alkire, CEO of the Big Fresno Fair, is passionate about 4-H, FFA and agriculture!  He wants everyone to not only enjoy the fair, but learn about the history of fairs and agriculture in general.  Did you know Fresno County is the biggest food producing County in the World???  In his continuing quest to promote all of the above, he has started to collect historical items relevant to the Fair and it's history.  Some of it was pretty amazing and everything had a "story" ... not only about the item, but how it was discovered.  This room is chock full of fair history, from an exact replica of the half mile wooden race car track that burned down, to First Place ribbons from 1913.  He is so enthusiastic about this project that people have contacted him from all over, offering their prize possessions for his museum.  By next year he hopes to have a separate building large enough to house all the items.  This is a must-see for everyone!! 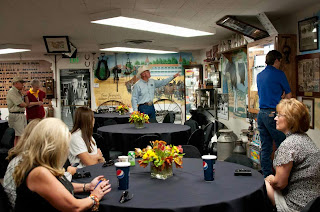 From the first ever cotton candy machine to the first popcorn machine (with pictures documenting their use at the fair) to Horse Racing saddles ridden by legends, this little room has it all.  They even have a slot machine.  One of the previous managers had it placed outside his door and insisted anyone wanting to speak with him, had to drop in a few coins.  Course he had it rigged to NOT pay off so he could collect the money at the end of the year for use at the fair.  Pretty smart guy!!! 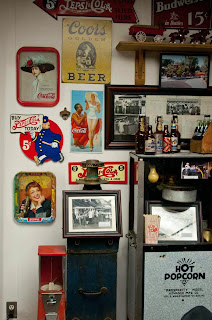 John included the bad history right along with the good.  Fresno Fairgrounds became an internment camp for the Japanese during World War II.  These energetic people tore up their mattress pads to make uniforms for their baseball team in order to keep busy.  Many were farmers who might have lost their land without the help of their neighbors who kept the crops growing until their return. 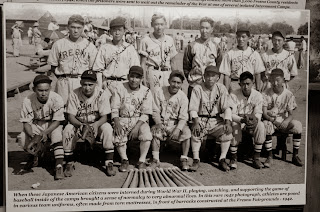 Here's one for my train friends ... now THIS would have been a great fair attraction!!  In 1919 the opening ceremonies began with a BANG!! The Great Train Crash had two engines set on one mile of track.  They raced towards each other at 35 mph until they crashed.  What a spectacle that must have been!! 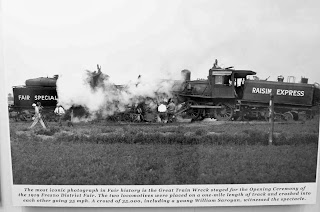 That's MR. Wyatt Earp!!!!  Wyatt was known to LOVE horse racing.  He apparently had several of the fastest horses ever and made lots of money, along with his brothels, hotels and saloons.  Records indicate that he raced his horses at the Fresno Fair in 1889.  Who knew???  Hanging next to his picture is a coat rack from one of his hotels.  Wyatt might have hung his hat on that rack ... and maybe his coat ... and maybe ... well I won't go there!! 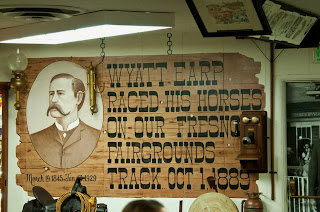 In one of the sheds out back, John found this really old saddle.  Upon taking it to a saddle repair shop, he discovered a date on the wooden tree of 1890 (I think ... note to self, write this stuff down!!!).  It's fun to think that Wyatt Earp might have ridden this saddle!  A long shot, but you never know!! 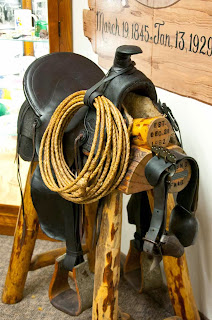 During one of Johns local group presentations, a retired newspaperman offered him all of the original drawings he had done as advertisement in the Fresno Bee for the fair over the years.  With no room available, John hung them from the ceiling.  Long time Fresno resident and motorsport hero Blackie Gejeian not only donated items from his race days at the fair, but came in and signed the wall painting of his race car.  The huge amount of history crammed into this small building is amazing.  Tours can only be arranged by appointment, but if you've ever been a participant in any fair, or even if you've just been TO a fair ... made arrangements to see this museum.  It was worth every second of our two hour tour!!!
Posted by Nancy Kissack at 7:54 AM