I suppose it's human nature to try and get something for free.  Maybe not ... maybe it's just some people always think they should get everything they want without paying.  For those people, we have THE BELL.

The bell tolls every time we catch someone trying to sneak in.  It's not like it costs a lot, you pay $5 and get either $5 worth of food or you get $5 worth of pumpkins.  Your choice.  Still, people try to get in and not pay. 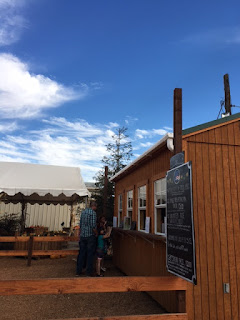 Above is where you walk into the cue and up to the windows.  Below is where we usually have someone stand and check every single person entering.

On school bus days there's just not enough people.  Yesterday I had six buses come in at the same time with 400 kids.  The usual number of 200 parents accompanied them.  Even though the school has told them they will have to pay an entry fee, most try to get around it by sneaking in.

I watched an entire family come up to the gate, look at the "Enter" sign right next to the "here's what it cost" sign, only to make a hard left.  I could smell the burning tennis shoes as Mom led the way to the Exit gate.  She passed it, went another 30 feet and moved a barrier to enter.

She was a BELL RINGER.  I turned all five of them around and directed her right back to where she began.  Oh she said ... I was confused.  This wasn't here last year.  Yes it was my dear and you need to go pay. 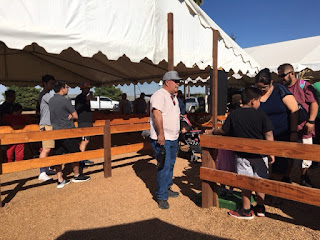 The second one was another Mom, bringing along a sibling to one who just came off the school bus.  She went through the line, but when they told her she had to pay, she also made a screeching turnaround, stroller tires leaving rubber in the sand and headed in anyway, trying to pass her kid off as one from the bus.

BELL RINGER!!!!  She and her child were given the choice of paying, or being escorted out.  She chose to pay. 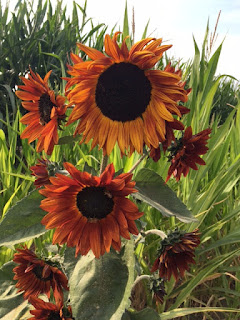 And so it goes at the Patch as I stamped or put a wristband on a total of 100 teachers and let in 531 kids in 60 minutes.  I think that's a record.  Surprisingly, these schools were pretty well behaved.  It's the teachers that cause the problems.

Everyone gets a paper showing them what time their Barnyard Squares program begins and where to eat.  Only two things to remember.  She said I never gave her the paper and they all sat down in the wrong area, which had been reserved for a large handicapped group.

She was not happy she had to move.  WELL .... WHAT DO I DO WITH ALL THESE LUNCH BOXES???  I'll move them for you.  She finally moved one while I moved three gigantic boxes full of lunches to the correct tables.  Oh well .. you can't please everyone.

Guess what ..... it's time to start it all over.  I'm not sure what day it is, but I think I have two or three more days before the gigantic weekend crowd.  Did I mention the ice machine is on the fritz?