Another early morning.  Honestly, I can't wait for November when I can sleep in and do nothing all day!!  The good news is the weather has cooled off considerably.  I hate to say, I've become a slacker. I sit as much as possible and try to stay in the shade.

It didn't work out so well in the morning however.  Someone forgot to schedule a person for the snack bar.  I suppose they thought it would be me selling the snow cones and cookies, but I had 300 kids to get in the front gate.

I got it set up and begged for someone to come in.  They obliged.  Off I ran to stick on 75 wrist bands for the first group of teachers and parents.

You never know how it's going to go at the front gate.  Believe it or not, the kids and teachers are the best.  It's the parents and grandparents that become a problem.  They all think they should get in free. Yesterday, someone told someone who told someone (you know how that goes) who passed the word that TWO parents could get in FREE for every child.  They brought ALL their friends and relatives.

That caused a lot of unhappy people when they found out they had to pay $5 each.  In return, they get a $5 token for food, pumpkins or one ride.  It took me over an hour to get them all in the gate.  What a mess. 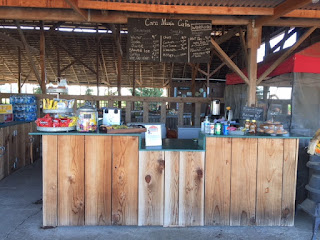 In the meantime, another school bought snow cones for their entire class ... 44 in total.  See this nice red box?  It contains a syrup machine so you can get whatever flavor you want.  Guess what bees love!!   SUGARY SWEET SYRUP!!!  They come from miles away just to lap it up.  We were all beeeeeing attacked (see what I did there?). 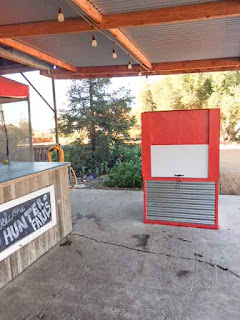 Not really attacked, but bees don't fly very well at all.  Especially when they are laden with pollen.  If you just ignore them, they will bounce off you and fly away.  We finally had to shut the machine down and wash the concrete with a hose.  All that did was send all that sugary water to the edge of the concrete where even MORE bees picked up the smell.

Time to go back to the old fashioned way ... put the syrup in bottles and dispense it ourselves ... 44 times in a row for that class.  It was pretty crazy for awhile there!!

The afternoon was very quiet once all the kids left, so I busied myself with seeing what supplies we had.  We're good for the week, but the next two weekends will be our biggest, so it's time to stock up.

Once I had a list in hand, I headed back to the Time Travel Tractor.  They have added an explosion at the mine that shoots out of the pond.  It's fun to watch people jump and of course I tell them all to get in THAT car.  It was NOT so fun when that sprinkler hit me dead between the eyes.  WHAT????

It took another run for me to figure out what was going on.  That's when my shirt got soaked.  Apparently one of the employee kids turned on the wrong valve and set the sprinklers to GO.  Just as it got turned off, the Boss came to take over so I could go home.  6:00 I think it was.

I went immediately to the couch ... did not pass GO ... and crashed.  With a good 8 hours sleep, I'm up and running this morning ... rather sore in places I never knew I had.  It's time to do it all over again!!