Another gorgeous morning at the Pumpkin Patch, except for that big black cloud.  No worries, my weather report says NO rain for the next ten days.   That suits us just fine, but the dark sky and the cloudy clouds are troublesome. 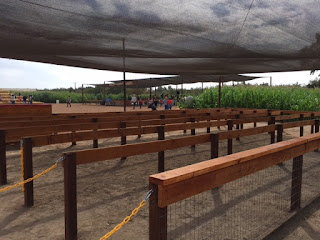 The lines were empty until I met up with 66 kids from Winfield School.  As we walked from one attraction to the next, a little boy ran up and tugged on my shirt.  "There's a man out there ... in the field.  I think you should check on him!!  He doesn't look good!!  In the field ... you should go check!  I think he's DEAD."

Knowing there was nothing in the corn field, I asked him exactly where it was.  "There's a man on that machine and he's got neck bones.  YOU CAN SEE HIS NECK BONES!!"  Then very quietly, "does that mean he went to heaven?"   Finally it dawned on me.  He had seen the skeleton man in the excavator.  Rather than try to explain all about the bones, I said yes ... yes it does.  He went to heaven.  It was easier than trying to explain a Halloween skeleton to a five year old.  I hope he's not scarred for life. 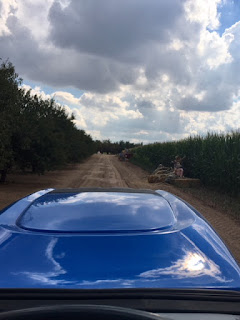 Pretty soon the sky darkened even more and it was beginning to look like those tornados we drove through in Kansas.  This old 1800's windmill was SCREAMING!! 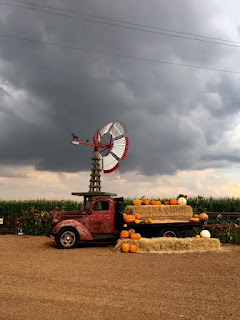 As the sprinkles began, we frantically raced around covering up the hay ride hay and picking up signs that had blown over.  Lucky for us, the wind was so strong it blew the shade covers enough to remove most of the dirt.

And then it began ... probably the biggest rain storm I've seen in all my years here.  It's a good thing this is all nice sandy soil because the water just disappeared.  No need to irrigate the corn today!! 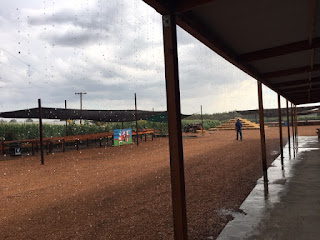 We closed the snack bar completely and began cleanup.  I brought three huge towels just for the occasion to dry up the ride seats.  In no time we were back in business ... just in time to go home.  But WAIT!!  Someone forgot there were two big parties coming to the barn.

At 5:30 I finally snuck out the gate.  I'm exhausted and I've got company coming.  Lucky for me she brought dinner from Applebees.  My favorite salmon and veggies.  I literally fell into bed at 9:00.

Today I do it all over again, only this day I have FIVE schools.  I'm determined to slow down and push work off on others.  Shhhhh ..... don't tell them!!