My Watch Is Freaking Out

Oh my ..... another day at the Hunter Farms Pumpkin Patch.  The days are screaming by, but not fast enough.  I'm not sure I'm going to make it to the end!!  Every day gets busier and busier!!

Remember that Apple watch I bought?  It has this exercise program on it, depicted by these round circles.  In the beginning, it sets a goal for you ... how far to walk, then keeps track of your distance by GPS.  It also keeps track of how long you are standing up.

Rather annoying at first, it kept telling me to get up and move.  I rather like sitting on the couch, so I declined.  Since I got it, I have never completed a circle.  Then the Patch work began.  Every day I have taken on a little more work, keeping busy picking up trash in between.  I wonder if everyone's house looks like this Pumpkin Patch when the kids throw all their trash on the floor?

At any rate, Monday the watch was pretty happy, telling me I had walked over 8 miles.  I couldn't believe my eyes.  Did I really walk that far?  Tuesday it was 9 miles.  Yesterday ..... wait for it ..... 9.89 miles walked.  The watch is freaking out, giving me all kinds of commendations, explosions, achievement awards and stars.

I should have had this watch when I was training for marathons all those years.  It might have motivated me a little more.  Nine miles is a LOT, never to be done day after day.  If you can run 13, you can run a marathon, or so they say.  Generally for us old folks, it's 6-8 miles every other day with a long run on Saturday.

I think by the time October 31st comes around, I'll sign up for another marathon ... or maybe I'll just sit on the couch for three weeks to make up for the overwork!!

Another day, another dollar.  At this rate, I'll have enough money to pay for motorhome fuel for TWO years!!!

One quick disaster yesterday ... the cleaning lady didn't show up and we had a big Realty Company party scheduled.  I ran around emptying trash cans and picking up all the papers the kids had thrown on the ground.  No I did NOT clean the portable restrooms ... that is NOT in my job description!! 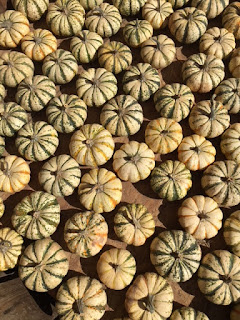 We had about 450 students who came and went with pumpkins.  These field trip pumpkins are the perfect size for little hands.  Once gone, I grabbed my two retired helpers and set them to filling gem mining bags.  Pay dirt in a bag for the kids to mine.  Amazingly, they filled two huge steam trunks.  Thats when the mine's water system broke down.  Just the usual stuff! 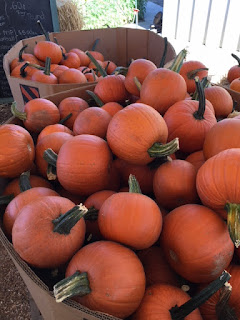 Today ..... over 500 kids are scheduled with tomorrow being even worse.  On Friday we will have over 600 small humans running all over the Patch, throwing trash on the ground and screaming for the biggest pumpkin.  Just another day in paradise.

By the way, did I mention the day after the Patch closes I have to drive 6 hours to an RV rally in the Eastern Sierras?