So Happy To Be Back To 500 School Kids

You won't believe the numbers.  I know I've said this before, but it's crazy the number of people who are funneling through the Pumpkin Patch.  I would have more information except for someone who keeps coming around to clean and organize when we have 50 people in line at the snack bar.  She threw away my paper where we were marking down everything we used.

Rather irritating since it would have been the first time they had any idea the amount of products they go through in a single weekend.  About the only numbers I have are for this little Snowie machine which I operated most of the ten hour day.

This little baby is a moneymaker if you need one.  I made well over 800 shaved ice in one day.  Multiply that by $4 and see what you come up with.  I suppose it helped that it was a rather warm day.  Water?  We used sixteen of the big cases from Costco. 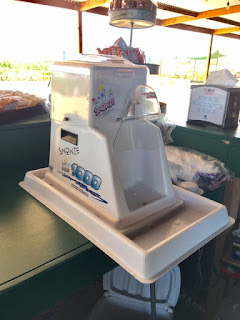 Thanks to some amazing girls who work the snack bar, we never slowed down for a solid eight hours.  Even working the food, I got in 7.12 miles on my watch who now thinks I must be on a bicycle!! 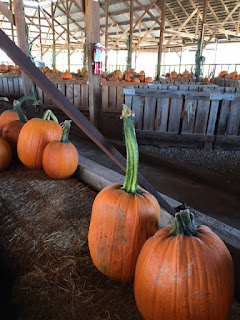 Thank goodness nothing broke down this time and we sold every last hotdog.  SUCCESS!!!  I have to tell you though, I'm SOOOOOO happy to be back to having 500 school kids come in today.  It's much easier to handle than that weekend snack bar.  Never thought I would be saying THAT!!!

The other plus is that the school kids are not tall enough to sneeze all over the cookies.  It's a good thing they are all packaged.  Even so, you'll never see me eat another one.

Next weekend will be our last, so I'm duck taping a paper and pencil to the fridge so we can keep track of the number of hot dogs and nacho chip bags we use.  Hopefully she won't be throwing THAT away.