I was up early again yesterday, but that's nothing different or exciting.  On THIS day however, our little puppet refugees were expected to arrive.  It's funny that they were caught up in customs at the Canadian border, which is where these guys were hatched.

Remember the old television show Hollywood Squares where the contestant decided whether the celebrities were answering the question correctly or not?  Well meet Barnyard Squares.  All those kids coming from the schools don't get an entirely free ride ... they have to have 20 minutes of learning experience while here.

In the past, it was the Magic Oven, where Farmer Scott turned tomatoes into spaghetti sauce, and corn into Fritos Chips.  Now we have these characters who answer questions, like what does it take to make shirts, jeans, underwear and money?  Why cotton of course, and it's grown by a California Farmer. 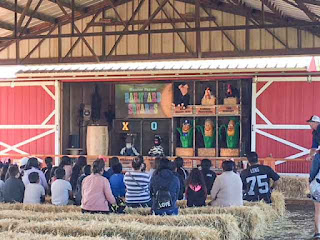 The two contestants are Billy Goat and Mrs. Woolrich.  There needs to be some adjustments, since Mrs. Woolrich looks like she's all lips.

Finally up and running yesterday for the first time, the kids were quiet as can be ... meaning it was sure keeping their attention.  They learned where milk, eggs and beef come from, as well as bee pollination and how corn and wheat grow.  They loved it!!  Especially the part about the underwear!! 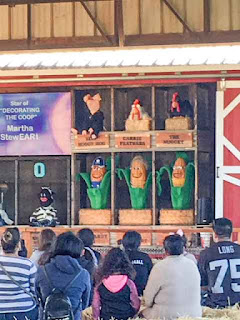 I ran about 200 kids through the show, drove tractor for awhile and before I knew it, it was time to give lunch breaks.  Suddenly I was hijacked into setting up the hot dog stand.  Food service is not my bag.  Too many rules.

At any rate, the previously served hot dogs were not hot enough.  I'm guessing because they have a "warmer", not an actual cooker.  With a huge roasting pan present, my solution was to heat up water in the roaster, drop in the dogs, and once hot, keep them that way in the warmer.

Unfortunately, that meant I had to eat THREE dogs along the way to be sure it was working.  With everything set up, I beat a hasty retreat.  You have to wear hairnets in food service, and I had trouble getting it over my hat!!

Back to the tractor, wasn't I surprised to find this freeloader riding without a token.  It was pretty hard to get a picture with one hand on a bumpy road, so this is as good as it gets.  See the yellow dot next to his left wing?  That's all pollen.  Both legs had big yellow bumps of what ends up being honey, which we also sell. 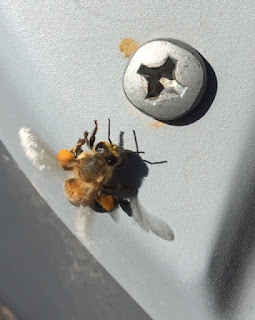 At around 3:00 I made a big mistake.  I lifted a HUGE case of water into the back of a quad, then lifted it back out.  I can now tell you EXACTLY what muscles are required to do that trick.  Oh my aching back!!

At 5:00 I ended up on the Time Travel Tractor through Sneaky Pete's gold mine and Dinosaurland.  The owner's son and I had a blast.  He was dressed up as the Lone Ranger, who would jump out from behind the building and throw a bundle of dynamite in the pond.  I yelled FIRE IN THE HOLE and BANG!!!  The electronic blaster would shoot off an explosion of water.  The kids screamed and the parents jumped.

By 6:15, I was still on the tractor, having been on my feet since 8:00 in the morning.  I darn well better lose some weight while I'm here.  I've never walked, run and climbed so much in my life!!

I'll do it all over again on Sunday.  I am actually getting a day off today!!