Movies Under The Moon

I apologize for any incorrect English or misspelled words.  I'm pretty rummy in the head right now.  I stopped by the Hunter Farms Pumpkin Patch yesterday around noon just to see if they needed any help.  Of COURSE they needed help.  What were you thinking?

Not terribly crowded, I stopped in at the tractor stations to give them a lunch break.  They added four more cars to the Time Travel Tractor, meaning you have to watch your line of travel around the curves much closer.  MUCH more fun to drive that way. 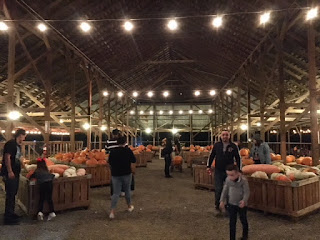 With that done, I hung out at the Snack Bar for a few minutes to see if they needed anything.  THAT was a mistake.  Apparently the people from Friday night didn't refill ANYTHING.  Not the four huge ice chests full of drinks, not the snow cone syrup dispensers and not the cookies, breads and chips we sell.

I spent the first two hours rounding up huge boxes of potato chips, fruit snacks and five cases of water.  It wasn't enough.  We went through eight cases of water (not the ones you get at the grocery store but the HUGE ones from Costco) and ten cases of soda (also the huge ones I can barely lift).  It was only the beginning.

On Saturday nights, they show movies under the stars.  People bring their chairs and blankets and sit in front of a huge screen dropped from the bounce pillow barn.  LOTS of people!!  That means LOTS of hot dogs, nachos and snow cones.

The first movie was Nightmare Before Christmas.  Coming up is Hocus Pocus and Charlie Brown something or other.  I'm not up on the latest Halloween movies.  Nothing scary I might add, although Bette Midler can be rather frightful.

I stocked up on hot dogs, warmed in a huge turkey roaster then placed in a warmer, hot dog buns kept on the OTHER side of the warmer, nacho cheese (not my favorite), nacho chips and jalapeños.  It wasn't enough.  I made three more runs for all of the above.

I can't believe how much food those people ate.  I've never wrapped so many hot dogs in my life.  We  sold well over 100.  The cheese machine which spits out the yellow stuff gave me fits.  In no time at all, it was time to change the bags.

Oops they forgot to warm up another bag.  OH NO ... we're OUT of hot dogs.  Throw another bag in the roaster!!!  We're out of jalapeños!!  It was total chaos!  We got it done, but only after snagging two passing employees to help out.

Not once did I get to enjoy the beautiful crescent moon over the barn, let alone take a picture.  And the ICE ... I hauled ten ice chests full from the maker in the barn.  Luckily my fingers still work.  The best news ever ... I've lost 4 pounds!!  I kid you not.  It's why I do this every October!

I tried to bail a little early since the poor puppies had not eaten and it was 7:30, but I was waylaid by the Boss Man.  We had a little talk about my wages, which I had kept to a minimum salary amount, mostly because they are my neighbors and you help your neighbors.  That's how you become friends.

I finally caved and went on an hourly rate, probably twice what I was taking before.  With that out of the way, he asked if I would manage the snack bar on weekends.  They really do need someone to think ahead and stock up for these big nights.  I'll probably be sorry, but I said sure ... after all, it's only going to be for two more weekends.