Not the kind you are thinking about, although there WERE a few big MALE chests I spotted, but these ice chests were the object of my attention.  With such huge crowds on the weekend, staying stocked with product is the main problem.  The kids sell sell sell and completely forget to restock until they are out.

I have to admit this stacking situation was NOT my idea.  We were getting along just fine on Saturday.  On Sunday, someone else appeared and decided to take over the snack bar.  It's not my call, so I kept quiet.  I think he didn't get the memo.

At any rate, he insisted we fill all four ... two with water and two with soda ... and stack them.  When the top one runs out, we move it out and start on the bottom, refilling, moving and restacking.  That would have worked if we only needed to do that once.  On the second round, there was no one to lift these 300 pound containers full of soda and ice.

I scrapped the idea and just refilled the top two, almost constantly for seven hours.  At least I didn't have to bend over so far!  My back thanked me.  Two on the floor would have helped, but he insisted there wasn't enough room to walk around.  I was happy when he left to bother someone else!! 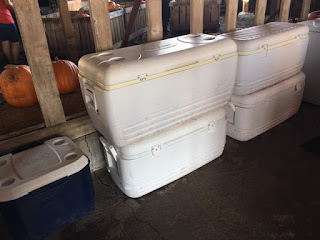 I think we went through twelve large cases of water, ten of the big cases of pepsi, eight cases of 7-Up and three cases of apple juice.  We sold 345 hot dogs and close to 300 nacho trays, using up four gallons of jalapeños.  That doesn't count all the cookies and fifteen gigantic boxes of chips.  It was just crazy trying to keep everything stocked.

I didn't get a break or lunch ... just a hot dog on the run, and only because I needed to be sure they were hot.

The REAL trick is ending up with NO hot dogs.  Saturday night they had almost 20 left.  Someone who shall also remain nameless, wanted us to reheat and sell them.  When no one was looking, I threw them in the trash.  You just can't DO that!!

This time we only had EIGHT!!  We ran a special ... half price.  I walked down the lane yelling HOT DOGS $2.  GET THEM WHILE THEY LAST.  We sold every single one.  I was a happy camper.

Schools are coming in this morning, but it will be an easy day.  I'll be on the tractor most of the time ... YAY!!  Sitting is good!!