The Weird And The Wonderful

If I can just get past this weekend, I'll be on the downward slope.  I'm definitely trying to lower my mileage at any rate.  Yesterday was a measly 7.77 miles.  With seven schools coming in today, it should be even less, since checking them in requires less footwork.

I'm also going to train someone to rein in the crowds when they get their pumpkins on the way out the gate.  If I don't slow down, I'm not sure I'll make it to the end of October.  My feet are crying in spite of wearing my best cushy running shoes!

I haven't purchased any pumpkins yet, but almost did when I saw this one come through the line.  It was sitting forlornly in a wagon all by itself.  I snatched the wagon and went around the corner, hoping whoever put in IN the wagon would not show up.  Unfortunately he did.  Isn't this just the most beautiful one you've ever seen?

While the girls ran the patch, the men and boys harvested the largest of the large pumpkins and filled the barn.  Some are two feet tall with the biggest crazy curled stems you've ever seen. 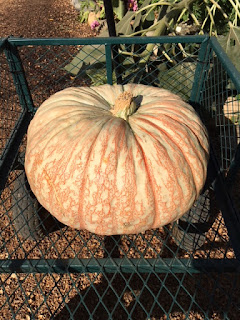 Then there was THIS one.  I'm just going to leave it right here.  It's actually sitting in the office, but would make a great addition to a scarecrow!! 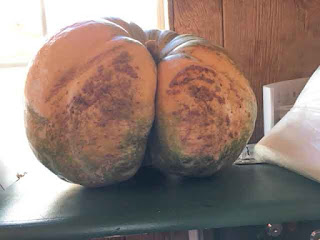 We are amping up for the last big week and weekend of October.  It's been crazy crowded (a good thing I suppose) as people bring their families out for a little Halloween fun.  I think the only thing that would make it better is Jurassic Park music on the Time Travel Tractor.

Having a few less people complain because their granddaughter was tall and had to pay $5 to enter would help too.  She went on and on about how we should "overlook" it.  Later on, I caught her at the snack bar ranting to the salesgirl that she should NOT have had to pay for her.  If we "overlooked" every child that tall we might not be in business.

I didn't say anything, but truthfully, this family does the Pumpkin Patch for their love of family fun, not because they make money.  It's a labor of love that hardly makes a dime as it is.

So I'm off for another day of torture!  Did I say that?  I meant FUN FUN FUN!!