Another quickie ..... this is my adopted grandson Braden.  Not really, but he feels like a grandson.  He's the son of my friend's daughter.  Finally in kindergarten, he's the one who everyone thought was a girl because Dad refused to let him have a haircut.  Thankfully when he started Catholic School, they required short hair. 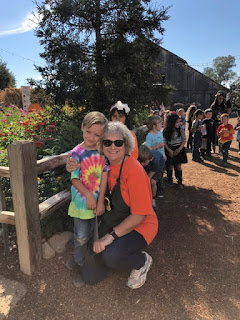 I have short time-itis.  Only four and a half more days and I'm really feeling it.  Believe it or not, my GPS watch says I've walked 186.8 miles in the last 26 days.  That's just insane.  I have legs of steel, but the rest of me is fading fast.

Only 450 kids shows up yesterday.  It was a nice surprise that they were reasonably behaved.  It didn't last long however.  Once the little kids were gone, the big kids showed up.  High School brats and smarty pants hoods that think they can do whatever they want.

Two GIRLS got into a screaming match which ended up with lots of hair pulling and punching on the dirt and gravel inside the barn.  Luckily our biggest guy was there to grab one from behind and drag her off, throwing her into the pumpkins.

More screaming and name calling and she finally walked off.  Once he made sure the other girl was okay, he caught up with the smart mouth who thought she was all that, and escorted her off the property.  She was cussing and smiling the entire way like she had won an Oscar.  I can't tell you how mad that makes me.  Someone needs to whip her a_____.  Uh oh ... here comes the Pastor's wife.  I'll be quiet!!

I really did want to dress up for Halloween candy-giving in my Jack Skellington outfit, but it's going to take too long to get the lumps and bumps out of his head.  Besides that, after 30 seconds, I could hardly breath.  I also discovered they forgot to include the pants.  Not good!!  Since I have no black pants at all, it will have to wait until next year. 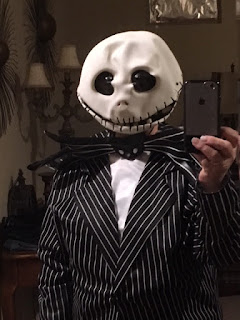 It should be a good day.  I'm hoping we are very busy so all that food they bought will disappear.  Otherwise my RV Rally on November 1st will be having nachos and hot dogs!!