It's A Lovely Day In The Neighborhood!

It's so peaceful and quiet at the patch.  Until the kids show up, that is.  With 110 arriving at 8:30, I was really trying to get everything set up early.  I had three new floaters to train on a VERY busy day that would see almost 500 arriving.  After I check in the teachers and aides, I pass off the classes to the floaters who take them to their first destination.

Nothing against teachers ... they are amazing examples of patience that I admire to the moon and back.  They can give orders like no other.  Unfortunately many can't take direction.  I make sure they have their schedule with only two things to be on time for.  Barnyard Squares (because it's automatic and will start without you) and the Seed Class.

Well that didn't work out so well.  It's incredibly difficult to wrangle the 25 or so kids in each class, I totally understand.  Seed Classes were missed because they decided to ride the hay ride five minutes before their allotted time.  Lets count ... 3 minutes to load, ten minutes to ride, 3 minutes to unload.  That's doesn't compute very well.

Dyno the dinosaur didn't care.  He went about his day playing on the pumpkins. 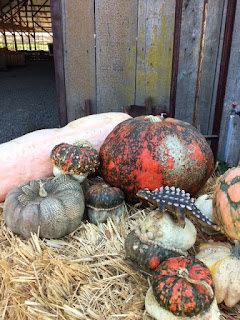 We try our hardest to keep everyone in order and on time.  These are the time travel trailers.  In the past, we loaded all the kids on first, parents in the back.  That didn't go over so well, so this year we let them sit wherever they wanted.  That didn't go over so well either.  Parents just couldn't decide WHERE they wanted to sit.  Come on folks ... we're loading over 100 people.  LET'S GO!!! 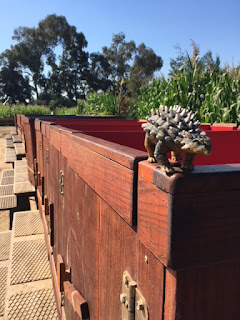 Then came the rather unhappy Dad.  For $5 he bought two tickets to the gem mining station.  He asked me where we got the sand.  That was rather a funny question and I didn't really know.  He looked down at the screen box we use in the sluice box.  Don't you have pans?  Won't the gold fall through?

That's when I realized he thought this was REAL GOLD mining.  Ummmmm well it's small enough to catch the "gems" the kids find.  After he found the first few pieces of crystal and turquoise, I think he figured it out.

Off for a quick visit to the baby goats.  It's my favorite place to be ... nice and quiet. 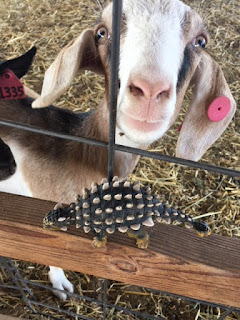 After running all over and handing out almost 450 pumpkins, I finally escaped to the tent next to the snack bar and turned into Nacho Girl.  It was time to set up the nacho cheese and heat up the hotdogs and buns for the Friday night crowd.

I was afraid I heated up too many, so I told the girls to SELL SELL those hotdogs.  They did a great job.  Dyno's friend came by and finished off the last six. 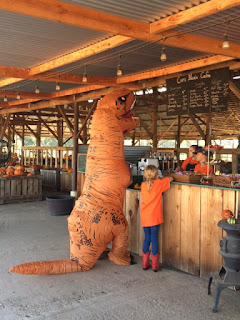 At long last it was time to head home and hit the hay. 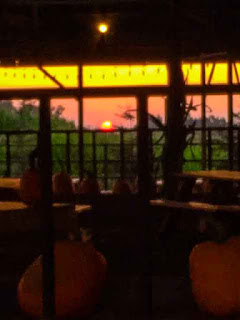 With something like 15 parties scheduled for today, I'll go in around noon time and help where needed.  I think the gal who works up the schedule is freaking out, thinking I'm working WAY too many hours and not the ones she scheduled for me.

She told me three times on my way out that my shift was 9-4 Monday.  She doesn't know I'm on a salary and it's not my job to tell her.  I'm keeping my head low today.