It's another wet one.  This was supposed to be the driest year on record.  The weather guessers apparently asked the wrong questions.  Mother Nature must be laughing hysterically.  It rained again last night, enough to wake me up asking the question .... is that rain I hear?  Is that more wet stuff coming off the roof and falling to the bottom of the drain pipe two feet from my head?  Yes ... yes it is.  Thankfully it's on the OUTSIDE of the house.

Not long after I bought this place, I discovered a waterfall INSIDE hidden behind the shutters that cover the big front window.  WHY ... I asked.  How is that happening?  Turns out there was a two inch spot on the fake rock wall outside that let in water like the Mississippi River.  It's a good thing I have good hearing, or it could have been disastrous.  I got it fixed ... but I'm always listening for water drops.

After giving Cooper his morning snacks .. I break two into four pieces so he thinks he's getting FOUR ... and sipping my morning cup-o-joe, the thought occurred to me that I was freezing.  Just what temperature is it in here? 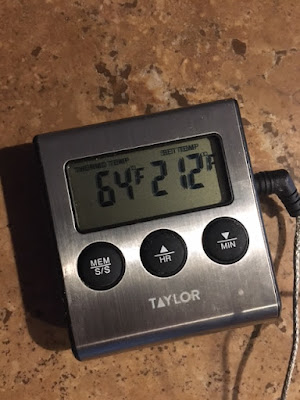 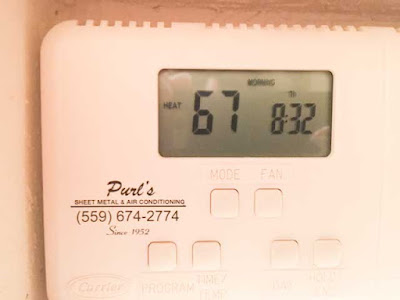 Just to make it even BETTER ... my indoor/outdoor temperature gauge says it's 63 indoors.  Why are they not all the same?  I put on another pair of socks. 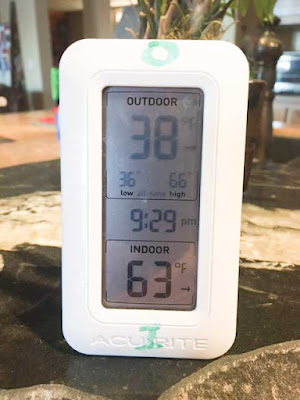 How far have I gotten on that quilt?  Nothing even worth taking a picture of.  Sitting on my buttinsky watching the rodeo is MUCH more fun.  Besides, Cooper tied me down to the couch so I couldn't move.
That's when I got a frantic call from She Who Does The Books at the lodge.  Our current point of sale company decided to completely change up their way of doing things, so absolutely nothing balances now. As an accountant, the frustration is epic.  Balancing is what we do and we are GOOD at it.
I think maybe they are JUST as frustrated because they hung up on her several times.  There are so many questions here, I can't even list them all.  We talked for several minutes, me trying to talk her off the ledge.  I'm sure you all have dealt with stuff like this.  That turned out to be the precursor to a long night of questions and debates at the three Board Meetings last night.
Today I'm going in WAY too early for me, to sit down and see what we can come up with.  Hopefully I'll ask the right questions so they don't hang up on me too.  Although I'm pretty sure the reason for that is because they don't have the answers.  This should be entertaining.
Who won the Round at the rodeo last night?  My favorite ... Stetson Wright.  This kid ... he has the balance, strength and talent of a magician.  I don't know how he stays on top of these critters.  This is Hell Boy ... known for bucking guys off by the dozen.
The scoring works like this ... not that you ever asked THAT question.  Total 100, 50 for how the horse bucks and 50 for how the rider stays on.  Generally guys win with scores around 85.  Stetson scored 90.5. 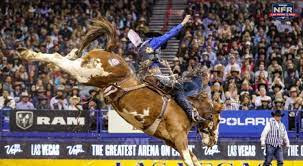 So I'm off to make my head hurt ... hopefully with good results.  It's raining, and is supposed to continue all day tomorrow.  I wonder what the temperature is going to be.  I wonder how much rain we have received.  I wonder who will win tonight.  I wonder if I can figure out those reports.
SO many questions!!
Posted by Nancy Kissack at 5:41 AM