Good barky morning.  Apparently someone got out last night.  Thankfully it wasn't Cooper.  I hear lots of barking doggies this morning, along with a loud COME HERE!!!  Not a bad way to wake up in the morning if it wasn't 3:00 am.  MAYBE Mr. Skunk has made an appearance.

Just to prove I'm getting in the mood for the season, I stuck this guy on my front door yesterday.  I don't know how I did it in the old days.  I worked from 6 am to 6 pm, then cooked dinner while actually MAKING all my own decorations.  Today I'm lucky if I get off the couch!! 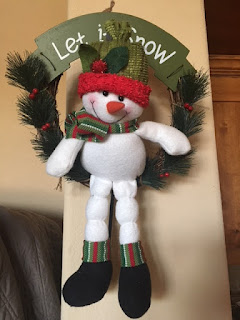 This was the first experiment of the day.  You've all seen those Pillsbury cinnamon roll commercials?  I finally found a can for $4.00 (instead of the $6.79 last week) and decided to give it a shot.  It would make an easy breakfast for the rally.
By the way, my early morning foray to the grocery store resulted in an even higher bill of $159.00.  I don't think I've ever spent that much for two bags of groceries in my life.  I guess it was the two $7.00 bags of frozen sausages for the rally.  There was no other meat acquired.
SO .... Open the can, cut up the cinnamon rolls into fourths and toss them in sugar (pretend they don't already have a cup of sugar IN them).  Then dump them into a pan and top with apple pie filling.  Bake at 350 for 28 minutes.  Don't do what I did next ... let them cool first.  THEN heat up the frosting a tad and pour over the top.
Next ........ just throw them out.  Okay, they really were not THAT bad I suppose, but just the rolls baked like normal would have been much better.  I guess I'll stick with the tator tot casserole. 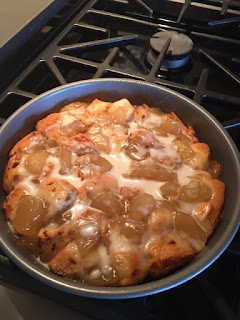 With absolutely nothing else going on around here, I thought I would take you on a quick trip to China.  In 2008 the Olympics were to be held there.  The government requested our Chamber of Commerce send over big groups to test the handling of their transportation systems.  They SAID it was to promote American business in China.  I couldn't turn down the $1200 price tag for ten days in China ... everything included.  Airfare, hotels, transportation and food.  Heck the airline ticket alone was $1700.
Anyway, we flew into Beijing, coughing and sputtering because we couldn't breathe.  All of China's electricity comes from burning coal.  Trying to make a good impression on the world, they actually shut down two of their plants so people would see less smoke (smog).  That meant most of the city did NOT have electricity.
Having been here forever, most of the families live in compounds built 4-500 years ago.  Usually a big box like structure with rooms around the outside and a community kitchen on one side.  One bedroom was used for the livestock ... chickens, birds and frogs mostly.
The government didn't want people passing by on the freeway to see this, so they kicked those people out of those ancestral homes and into huge apartment buildings like you see here, then completely destroyed their 500 year old homes.  When we arrived, they had not quite finished the cleanup.  By the way it is ALL done by hand.  No heavy equipment. 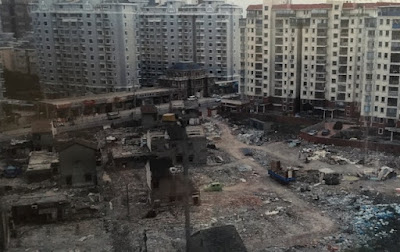 This is what it looked like everywhere we went.  Thousands of people squished into small areas.  Hang on to your purse because pickpockets stole from every foreigner they could reach. 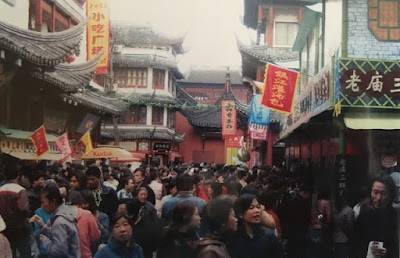 Surprisingly (at least to me) there were many lakes and waterways they took us to.  Of course the Emperor had the best spots staked out.  This boat had Chinese tourists loaded up ... I mean look at the back of the boat ... it's not much above the water level.
Only 25 of us tourists are on the boat they are looking at.  We yelled, laughed and waved until they finally waved back.  It's not something they do there ... they are VERY reserved.  Mostly that's because the soldiers are watching them every second of the day.  Same went for us ... they followed us everywhere with guns over their shoulders. 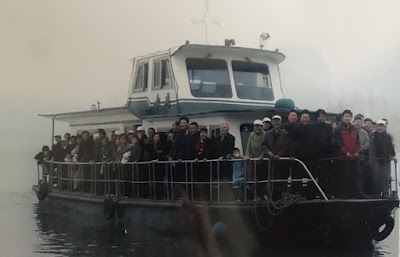 We were taken to only government owned shops to pay exorbitant prices for any souvenir we wanted.  I also noticed that the people working there never smiled and were not allowed to talk.  This was the pearl factory.  Pick an oyster and she would open it.  I spent zero dollars here. 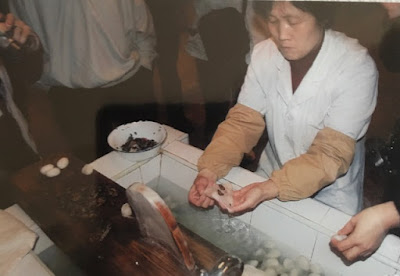 This is actually the Main Street of this little town ... I don't remember the name.  We walked by it on the way to yet another boat for a quick trip around the corner to the lake where we saw lots of folks fishing.  They did warn us to stay back from the side so we did not get wet.  That's funny ... why would they care? 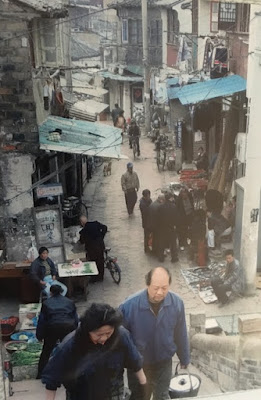 This is why.  As we rounded the corner and motored up this little canal, we discovered every house here had a concrete pipe coming out the bottom for ...... yup you guessed it ....... their sewer.  Oh yeah ... we watched as toilets dumped into the canal.  No one in our group ate fish after that trip. 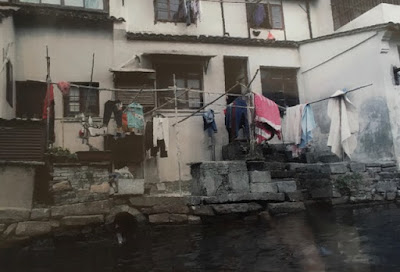 On my first trip over (yes I actually went twice), we had to eat their traditional food.  There was no "American" food to be seen.  They received such backlash, that on the second trip just before the Olympics, they Americanized their restaurants to keep the foreigners happy so they would spend more money.
Though they tried, they didn't succeed in that endeavor.  It may have looked like spaghetti, but it didn't TASTE like spaghetti.  I'll have a few more stories tomorrow.
So last night, just to change it up a bit, I actually cooked something for dinner instead of my usual Costco chicken tacos.  This is chicken marsala.  I wandered the grocery store aisles for 20 minutes before finally finding the marsala wine on sale.  It was quite tasty, but of course now I have to eat it for the next three days. 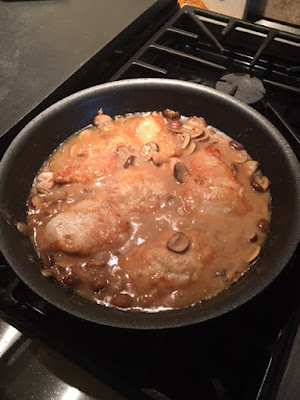 I watched another day of rodeo at the NFR with my favorite Stetson Wright winning the bull riding.  He's a 23 year old that looks about 16.  Same goes for his older brother.  Man that kid can ride a bull!!!
So now I guess I've put off eating breakfast long enough.  As expensive as food is, I'm NOT throwing that cinnamon roll thing away.  I'll just have to choke it down!!!

Posted by Nancy Kissack at 5:38 AM