Oh my goodness!!  That's not rain you see in the flashlight beam this morning, nor is it snow.  It's fog like we haven't seen around here in decades.  It's also a chilly 38 degrees and my heaters are working overtime!!

In the old days when it rained much more than now, we had what we call tulle (tullee) fog.  It was so thick you could barely see the road beneath your feet, let alone the center white line when driving.  Nowadays it's painted yellow to see better.

When we had to drive in the fog, you rolled down your window so you could hear other cars coming, then stuck your head out so you could follow the line.  Driving 170 miles like that to Bakersfield every Christmas to my cousins house was quite the trial.  People nowadays don't have a clue what it's like to drive in REAL fog. 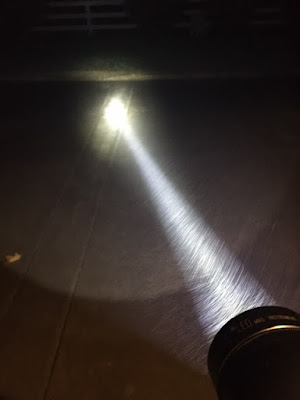 On another note, the reason you want your alarm working around here is because of all the stealing that goes on.  Every house in my neighborhood has not only a great alarm system, but cameras everywhere.  My neighbor pays almost $150 a month, just to have internet for her cameras.
Here's the thing.  Since the border has been wide open, thanks to the current government, most people think just nice people ... illegal immigrants ... are coming over.  That would be completely wrong.  The drug cartels are sending huge numbers of people, not to mention big trucks loaded up with drugs, across the border.  Who cares you say?
Right now, Meth is the biggest seller.  Smoke it once or twice and you are hooked.  Although it started with JUST marijuana, that's what took down my neighbor ... a guy who had a great job making lots of money.  It took him right down the rabbit hole to stealing anything he could get his hands on to pay for it.  The last I saw him, he lost his car and everything he owned.  He stole a bicycle and was seen pedaling through the worst part of town.  No one has seen him in almost a year now.
With no job and no money, they have to get the drug any way they can, which is by stealing from mailboxes and back yards ... anything you have not locked up.  Catalytic converters are also big right now.  Every single day there are reports of burglaries in my very nice upscale neighborhood, not to mention the deaths from them shooting each other over nothing.
THAT is why I need my house to look like Fort Knox.  So the next time you vote, please vote Republican so we can finish the wall and stop the drugs coming across the border which is killing so many of my nice neighbors who get hooked on it.  You think it's not bad because you don't see it, but it's epidemic here in California.  Yes, I'm sure there are some rural areas that may not be affected, but it's spreading like a bad disease.  Stopping the flow of drugs doesn't mean keeping the good folks out.  There are resources and ways for them to become citizens legally.
Anyway, on to the rain we so gratefully received.  It began early yesterday morning and continued the entire day.  We got over an inch in our area ... a much needed drink of water for the farmers.  We also got an entire day of snow pack!  Eight feet fell in the Sierras.  WOOHOO!! 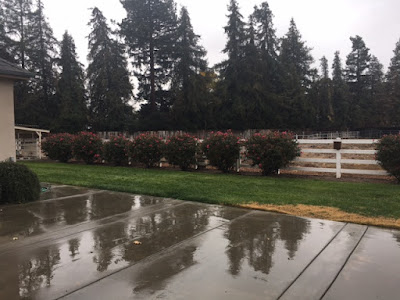 I'm pleased to say the painted wall has held.  The white spots did not return on either side.  Of course it doesn't happen until the sun comes out, which isn't going to happen due to the rain predicted for the next three days.  WOOHOO AGAIN!! 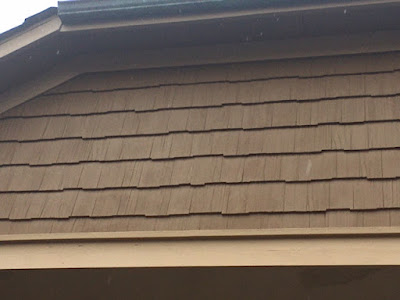 It was a nice day of lounging around.  If I go outside, I might melt, so Cooper and I stayed on the couch until it was time to head out to the Lodge meeting.  Of course that's when the rain began in earnest.
My windshield wipers couldn't keep up with the amount of water.  Add to that a continuous line of car headlights coming right at me, made driving a little dicey.  The cars coming the other way couldn't see either and were coming across the center line.  Defensive driving is the name of the game.
After driving through four flooded areas (with generally no rain, the city doesn't keep the drains clear), I made it to the parking lot.  Good thing I took my brelly ... BUT I didn't think about my shoes in the parking lot, which was 2" deep in the liquid stuff.  Of course I wore flats to be more comfortable.  It made for an UNcomfortable night of very wet feet.
Dinner was so good, I actually bought TWO.  I ate half the first one and bought another to go.  Now I don't have to cook for two days!!  The sauce on the green beans (which were fresh by the way), was something you won't believe ... but it was DELICIOUS!
Here's the recipe ... fry bacon, fry onions with the bacon and grease, and add thousand island dressing.  Sounds disgusting, but it was REALLY good.  I'm not sure I will try to make it, but it was quite tasty!! 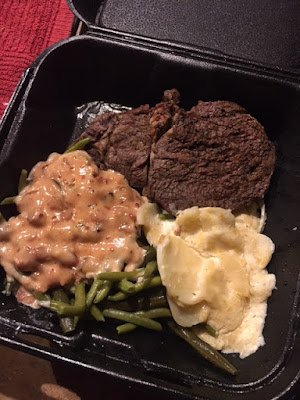 After a short-er meeting, because I begged the stand-in ER to make it short so I would not fall asleep in my chair, I drove home, dropping another gal off at her house.  She doesn't live far away and it saves her the price of fuel.  Then I collapsed on the couch with Cooper and his favorite toy. 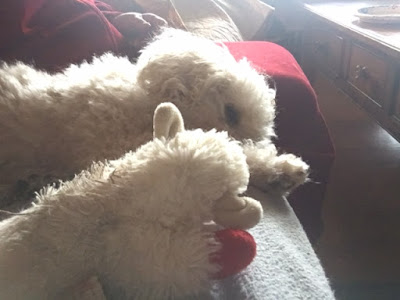 He got that for Christmas last year.  I've washed it three times and stitched it back together FIVE times.  What could I do, it's his favorite buddy!!!
I'm feeling kind of beat up today with only four hours sleep.  You will probably find me on the couch, after I have a tasty tamale for breakfast ... or maybe steak and eggs!!  I love having options!!

Posted by Nancy Kissack at 5:39 AM