The Fleas Must Be Asleep

I suppose this isn't exactly a flea market, although many booths are reminiscent of roadside yard sales.  It's the big Sell-a-Rama in Quartzsite.  Be there or be square!!  Almost ever single spot was set up with a tent or easy-up of some kind, but no one was home.  I heard snoring coming from one. 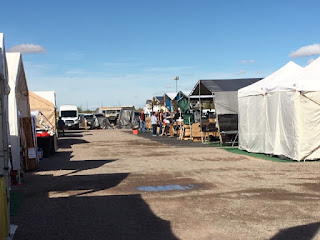 It's actually one day short of the grand opening, but I hoped to miss the crowds.  Parking in the wash wasn't an option with the last huge rainstorm so I drove the line twice before finding someone backing out.  At least the dinosaur was awake. 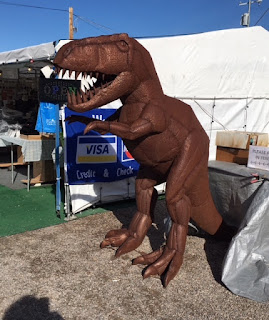 Store after store was closed as I tippy toed around the mud puddles.  For my Golden Spike readers, the Too Crazy Ladies are alive and well.  We haven't seen them around in awhile and were wondering if they were okay. 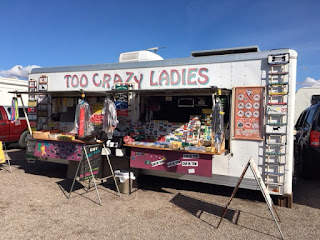 I have two favorite booths.  The first was so crowded I couldn't even get in to see the merchandise.  Turquoise jewelry must be the "in" thing now.  The second one is the kitchen store.  Really I've no idea what the name is since hardly anyone puts up a sign. 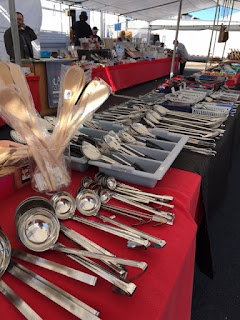 I got two stainless mixing bowls ... could be dog bowls, or maybe a drip pan for my smoker ... for only $2.50 each, followed by silicone mixing spoons for $2.00 each.  These run $5 where I come from, if you can even FIND them.  We used them almost exclusively at the cooking school. 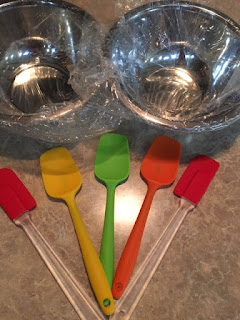 There is also a CBD oil booth.  Apparently that is the newest thing.  As I walked close to that one, the smell of incense almost knocked me over.  Me thinks someone is partaking in the back with the hopes incense will cover up the smell.  It doesn't.  I can smell the green stuff a mile away.  Is that legal in Arizona now??  If you're interested in the oil as a pain remedy, read Nick Russell's blog about his experience.

Here's the newest set up.  He also had the neatest, cleanest tent in the lot.  AND he was open for business, unlike those smoking and snoring. 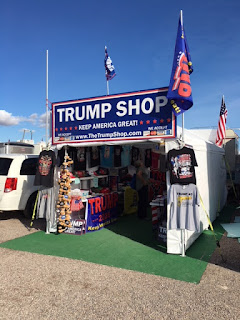 That was it ... my big foray into the world of flea marketing.  I didn't take a picture of the fifty cow skulls.  That's rather offensive to me, even though I might like to have one hanging on the wall.  They come from slaughter houses, with many having fake horns attached.

I stopped at the Cinnamon Roll trailer, oooooh cinnamon rolls, on my way out.  They were closed.  That's probably not a bad thing, since I found they are $6 each.  Yikes!!  I can make a dozen for that price.

I'm sad I missed the Big Tent.  I've already decided I'm making reservations for a week next year.  It will be pricey at the RV park, but that's the cost of having a parrot in the family.

At last I'm in my Arizona home and am happy to report there is NO snow.  It's cold as all get out, but no snow!!  My kitchen remodel is daunting and I need some advice.  Do I replace the countertops first and then the appliances or vice versa.  Anyone had experience in this sort of thing??