The first order of business was to clean the fairgrounds.  Chomping at the bit to get out of Dodge, we were lined up and ready by 9:00.  Ready ... set .... GO!!!   Trouble was, no one else was moving.  Hardly any rigs had pulled out (a first to be sure), making our job super simple.

In less than 30 minutes we had the place spotless, mostly picking up junk that had been there for weeks.  We said our goodbyes and headed off into the wild blue yonder.

My yonder was south towards Yuma.  You can see another big storm banging up against the mountains as I drove along under sunny skies. 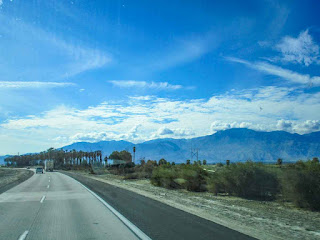 I almost missed the Brawley-El Centro bypass.  There's no signage to say BYPASS or even "this way to Hwy 8".  It was a last second decision that I hoped wouldn't land me in Timbucktoo.

At last I saw the East/West freeway and knew it was a good decision.  Highway 8, having been under construction for the last four years, was smooth as a baby's butt.  NICE!!  Then I ran into even MORE construction.  They do it right around here ... they built a concrete plant right in the middle of the freeway. 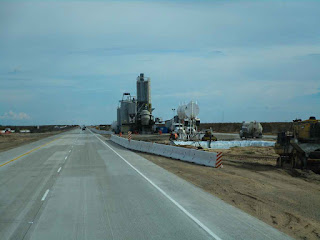 But what about Alice?  It's an inside joke.  Remember I said I cancelled Sirius Satellite radio?  I was so happy to get in the rig and have it still working my entire trip to Indio.  Cool ... maybe they forgot to turn me off.

Nope ... they remembered, but I forgot to put some CD's in the rig.  I had two.  First up, the Sonoran Dogs, a small kind of local bluegrass group we met in Sierra Vista.  If you don't make reservations, you don't get in, they are that popular.

They write a lot of their own music and were having trouble rhyming words.  Alice worked well with Nogales.  How about aurora borealis?  Or digitalis?  They all ended up in the song.  We laughed about the one they were writing about Niagara.

At any rate, I listened to it the entire three hour trip to Yuma.  I tried the second CD I have, but marimba steel drums for two miles was quite enough.  I know all the words to Alice now. 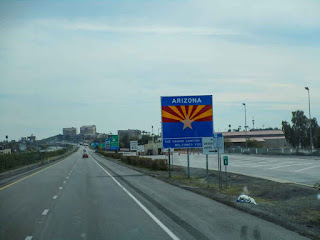 When I hit Yuma, I thought I would have lots of time to fuel up, but a second check of my watch showed I lost an hour.  Gosh I hate that time change thing.  I drove straight to Ray and Cindy Warner's beautiful house in this RV park.

They have room on the side for a rig (usually their 5th wheel) and a 50 amp hookup.  I fit in perfectly.  How nice is it to have RV friends where you can drop in and visit for a day or two!!  Besides that, I'm going to learn how to play shuffleboard this morning. 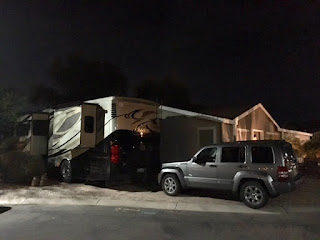 Then it's on to a soup and salad dinner in their clubhouse.  Yikes!!  That required a quick trip to Walmart which I needed anyway.  Jonathan was completely out of veggies.

I took these pictures on my return.  Here's the big turnaround at the end of the street.  I barely made it around to park! 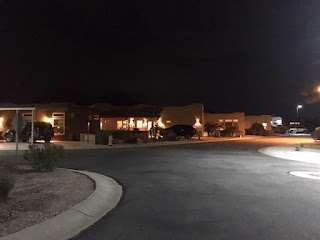 This park is huge with lots of amazing little houses.  All around the outside are rental spots if you get your reservation in early enough.  The amenities and happenings around here are many, bringing in people from all over the North ... mostly Canada. 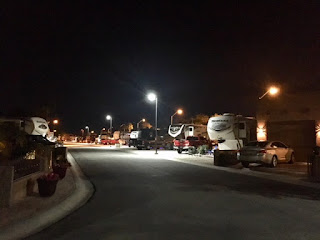