Bzzzzzzzzz ... that's me being busy as a bee.  No time to sit around and relax with the Vendor Building opening up.  I've still got a list of things to get and repairs to be made.  First up, chassis batteries.  There's nothing I would hate worse than having my rig not start.

I really wasn't thinking about it until someone mentioned I should have those replaced every 5-6 years.  I sucked up that information like a sponge.  It's been 7 years and I HAVE noticed a little slowness in the turnover.  What better place to get some new 31 AGM's installed.

Bad news however ... the battery guys said they cannot install on the fairgrounds.  Okay then, let's go to Walmart!!  Instead, I went to Redlands Truck and RV Service.  These guys are the bomb!!  Best service in the west.  If I ever had any trouble on the highway, they would be my Knights in shining armor.

They came to check my rig, said I had the cleanest battery box around, and "just leave the bay unlocked ... we'll take care of the rest".  Of course I did use my "single lady" charms, saying there would be nothing worse for me than dead batteries.  It didn't matter ... they would have helped me anyway.

A couple hours later, they arrived.  THEY being the Lifeline battery factory installation guy himself ... Jason.  It took a tad bit longer than normal, since the batteries were actually shorter, making connections more difficult.  We even discussed the new lithium batteries I had never heard of.

He finished just in time to strip my wallet of it's last remaining vestiges of green.  Don't have a heart attack, they cost me $975.  I'm back in business. 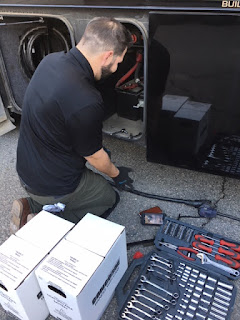 It's okay, it was marguerita/taco night with plenty of drink to drown out the sounds of my screaming wallet.  Even the ambiance helped!! 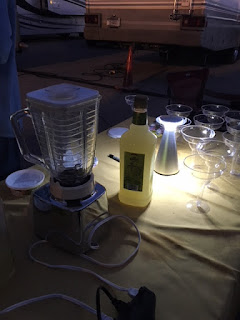 The tacos were amazing, with all the toppings you could imagine.  It was VERY nice just to sit and enjoy the evening since I had absolutely NOTHING to do with the prep of this meal!! 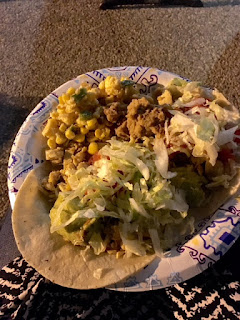 I was getting a little worried since my card reader had not returned by noon, but alas there was a knock on the door by a tall drink of water.  Yup ... the NBC photographer returned my CF reader.  Our pro cameras use much larger memory cards that do not fit in computer card readers, plus there's so much data on them, it requires a faster reader.

Of course I asked him what he shoots ... Canon or Nikon.  It's the question all photographers want to know.  Mostly Canon he said, but the Golden Globes were shot with a Sony A9 mirrorless, the latest and greatest.  He was the first ever to explain why and how it all works.  We talked for a long time about everything technical.  It really doesn't happen often that photographers will share their information.  What a nice guy!!

With my card reader back, I was able to download the sunset images I took previously.  It was a beauty to be sure!! 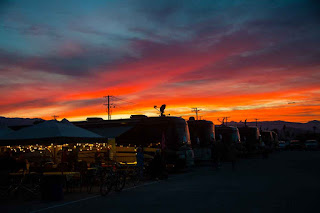 I love how it reflects on the nice shiny clean rigs.  No, those aren't mine, but I DO love the blue lights underneath the far one. 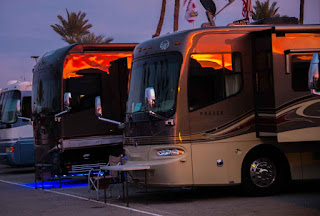 One last parting shot before I gear up for ice cream day. 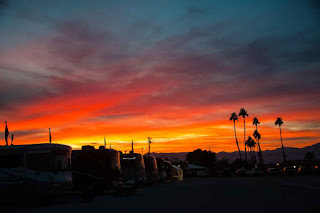 We've got two vehicles to acquire the ice cream from Costco and get it back to the fairgrounds before it melts.  It's going to be a crazy busy day!!  Wish us luck!!!!!