Backing up a tad, I'm still in Indio with this image.  If you are ever parked at the fairgrounds, keep a weather eye out for the guys flying overhead. Sometimes they land out in the parking lots, but mostly it's the big lot next door behind a restaurant.

Always beautiful and I just realized, the color of Arizona sunsets. 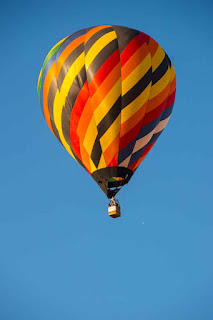 The first two days in Q it was overcast and cold all day long.  It was nice the sun decided to put on a show on the last night I was there. 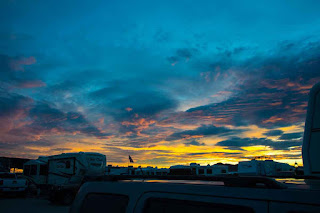 Skipping down the road to Vail, it's STILL cold, although yesterday it did finally climb up to 70 degrees.  I was actually able to take my coat off during the day, but that didn't help the night.  I was SURE I had an electric blanket here, but alas, it has escaped.

I went on the look yesterday.  It's funny how there are no electric blankets for sale in the desert.  I had to order one on-line.  Two more cold nights before I'll be sleeping peacefully.  Yes I could turn the heat up, but I'm too cheap!! 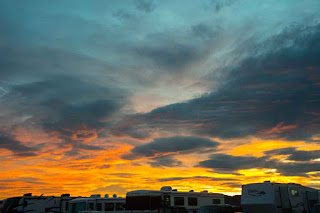 I figured three big loads from the rig and I would be set.  With all that put away, mostly in the fridge, I sat down to rest, until I got hungry.  I made another trip to the rig for the leftover sausages.  RATS!! I forgot the butter for my toast.  Another trip, but not before I was SURE I had it all.

When dinnertime rolled around I discovered all the spices I needed were in the rig, along with some bowls and Cooper/Jessie bones.  Another trip.

RATS again!  I forgot the sheets that need to be washed.  About six trips later, I was SURE I was done .... finally!!! 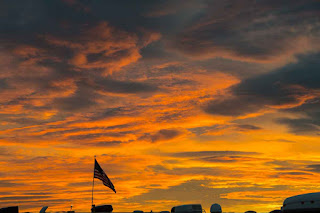 That would be incorrect because I planned a trip to the quilt shop to replace one piece of fabric.  The box with the fabric to match was still in the rig.  I'm going to wear out the key fob unlocking the door.

In between all those trips, I watched one of the best football games EVER.  The Chiefs played the Patriots for the Championship and the chance to go to the Super Bowl.  It was amazing to see how fast the Patriots could get down field and score ... something like 39 seconds ... and finally win in overtime.  I think there were seven touchdowns in the last quarter including overtime.

I did make a trip downtown to check out appliances, only to find out I have a big problem.  I'll explain it all tomorrow because right now I have to go out to the rig AGAIN and get the dog food and dirty tablecloths from Indio so they can be washed.  At least I'm getting lots of exercise!!