And so the Western Association of FMCA Indio Rally comes to an end.  In spite of never handling the ice cream this way before, everything went off without a hitch.

I cringed when about three hours after I got up, the rains came in a pretty big torrent.  I was feeling sorry for all those Prevosts parked in the dirt lot behind us.  Somebody's going to be doing a LOT of cleaning. 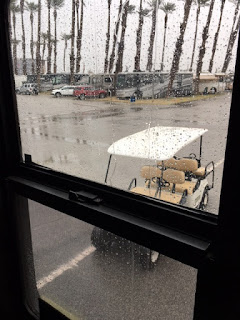 By 10:00 or so it stopped and the sun came out just long enough to dry up most everything.  That's when we jumped in a Jeep Cherokee with all the seats folded down and were off to pick up 75 gallons of ice cream.

I was pretty sure it would not fit .... but I was wrong.  Loaded to the gills, we made a beeline for the freezers in the building where we would be serving.  Very nice ... we won't be serving in the rain!!  Here's a small portion of the bowls, spoons and napkins I've been hauling around in my car.

We set out several buckets to soften, as scooping hard ice cream results in lots of blisters.  In no time, I had to put it all back.  Those freezers aren't the coldest in the west.  Finally it was time ..... let the hoards in the door!!!!! 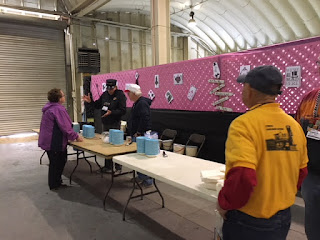 The guys scooped, the ladies set out bowls and spoons and I ran around replacing empty containers with full ones.  That's when I realized I forgot to deliver the bars to those who cannot attend ... the vendors for example.  Knowing we had about 20 boxes too many, I probably gave them more than they needed, but I didn't hear a single complaint.

Back to the building, we were regaled with German Beer Hall music by the Frustrated Maestros.  I should have brought my ear plugs.  My goodness that was LOUD!! 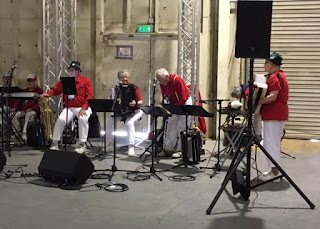 Everything went smooth as butter, or ice cream as the case was, until the very end when I realized we had so much ice cream left over.  What happened??  Last year I ordered 75 gallons and we used up every single scoop.  THIS year I ordered the same amount and we only used 46.  Yikes!!  That's a LOT of extra ice cream to get rid of.

I counted the spoons just to be sure.  I had right around 2000 to start, and sure enough, I've got a thousand left over.  Where did everyone go??  By the count of rigs, we should have at least 1500 people.  Time to figure out what to do with 18 boxes of bars and 29 gallons of ice cream!

In the end, they gave it away to all the Captains who volunteer to plan and put on this shindig.  It was a good idea in my book.  You watch ... next year I'll cut back and we won't have enough!!

To end an otherwise perfect day, I went to In N Out with the Painter family for dinner.  If you're going to blow your diet with all that ice cream, you might as well blow it BIG time!!

I'll catch up on everything else tomorrow.  After our fairgrounds cleanup this morning, I'm heading off to Yuma for a couple of days.