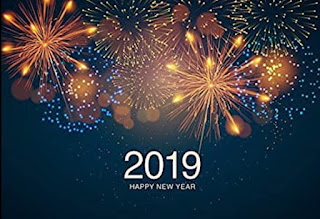 I'm so happy to say I survived another year on this planet.  Honestly, I never expected to live this long at all.  Longevity does not run in my family.  Everyone said the world would end in 2000 ... Y2K if you remember ... so I figure I've been living on borrowed time ever since.

It was a peaceful quiet night as Cooper, Jessie and I spent most of our time on the couch.  I kept thinking I should get up and exercise or something, but it never happened. 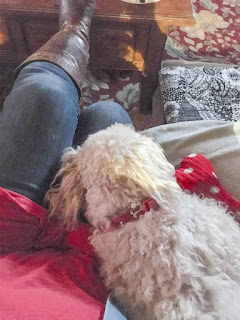 Television, Dish Network to be exact, didn't have anything exciting going on either, except this.  Lewiston Idaho was having their New Year's Eve Bull Bash.  Ride a bull, win money.  All the local guys entered.  Sorry about the blurry pictures, but my phone hasn't worked well since it was updated. Isn't that always the case?

I'm not sure what these people were thinking, because they were in an outdoor facility with heavy coats, hats and scarves.  You could see the breath of every person.  Even more so with the bulls, which made them look pretty ferocious!! 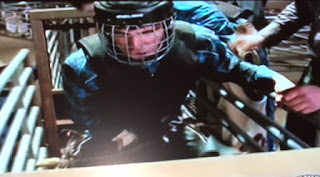 I've never watched bull riding that made me laugh, but last night was the night.  This is not your Pro Rodeo, although every single rider had just as much intestinal fortitude.  Several of the bulls kind of skippy skipped around the arena, with only a couple working hard like this guy.

While the cowboys rigged up, I could see way in the back, a bull had gotten his horns hooked in a section of fence and was wreaking havoc.  Cowboys were frantically trying to figure out how to get him loose.  They finally just gave up as the fence panel became toast. 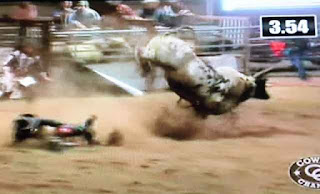 The announcer wasn't the highest paid either.  He kept forgetting his microphone was on.  There were a few bad words here and there along with lots of confusion over who was up next.  What better way to spend your end of year celebration than getting stomped by a bull???  Congrats to the winners, whoever they were.

Around 11:45 pm, the fireworks, or rather gunshots, began.  Someone had a machine gun, or at least a big semi automatic.  Thank goodness he was far away.  Jessie wasn't doing too bad until my neighbor shot off several rounds.  The crack was doubled with echoes off the trees behind me.

Sounds of sirens soon filled the night and they all stopped.  My thought was they should send out fire trucks, Sheriff deputies and ambulances around every neighborhood with sirens blaring.  They would all think the Po-Po was coming and put their guns away.

By 12:30 it was quiet, except for Jessie, who was now wired to the gills.  I spent the next hour trying to calm her down by clutching her tight to me.  I'm pretty sure that Thunder Shirt won't work, as neither did my "clutching".

Another hour and I just got up.  I was thinking about celebrating by making aebleskivers this morning, but not sure I want the cleanup job afterwards.  Maybe toast would be better!

Here's a big HAPPY NEW YEAR'S wish to each and every one.  I hope your New Year is filled with peace, love, kindness and chocolate covered marshmallows!!