I'm probably the least patient person you know.  I hate waiting for people to show up for whatever it might be.  It's even worse when I go to Lowes to order a refrigerator and there's 10 people in line behind ONE customer service person.

So when Rodrigo didn't show up the first three days, you can imagine my frustration.  When he called to say he had a flat tire, I didn't believe him, but I tried my best to be nice.

Wednesday morning he called AGAIN to say this time it was a broken water line.  Oh please!!  I laughed and told him I was going to Lowes to buy my OWN tools.  He promised to be here after lunch.  I smiled like that emoji guy with his tongue hanging out.

In the meantime, I had a great lunch with Lynn and Dave Cross at Arizona Pizza.  If you ever want a good lunch, stop in and have their one slice meal deal.  Great balls of fire!!!  Those slices were 12 inches long and 6 inches wide and there were TWO of them on Dave's plate.

Nicely stuffed, we came back to the house and chatted for some time before I decided to call Rodrigo again.  Amazingly, he was on his way.  Dave suggested they leave, since his truck was taking up half the driveway, not allowing anyone else in.  We will catch up again later.

Success!!  Rodrigo made it!!  He looked at the problem and said yes, he does this about every day.  The question was can you do it NOW!!  "Of course!"  Just the words I wanted to hear.  He unloaded his tools and pulled out the fridge.  YIKES!!!

It looks like there was a nice water leak at some point.  We checked it out up one side and down the other.  It's completely dry with no damage other than the printed wood paper coming off the cabinets. Yes really ... it's not even REAL wood on the sides, only the fronts are the real deal. 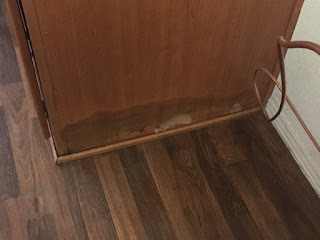 As he unrolled the cords, I mentioned how I liked to work with tools, but had no idea which one to use for this cut.  He showed me how to handle every one of three and told me where to buy them.  Harbor Freight he said.  Even as cheap as they are, they will probably last my lifetime. 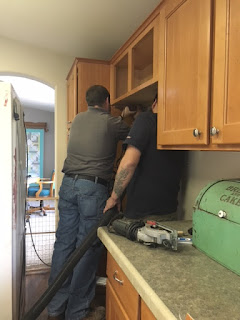 He drew a line and used a hand skill saw with a blade deep enough to cut a 2 x 4.  I remember Miss Terry telling me about this one.  Then he used a reciprocal saw to finish the ends and an oscillating saw to cut the sides to the back.  Pretty cool.  The second guy held up a vacuum to catch all the sawdust. 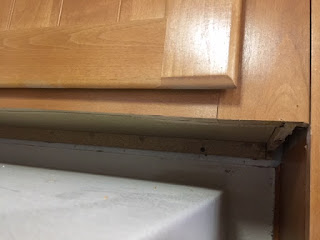 All done for a measly $100.  I probably could have purchased a set of tools for that price, but found out the refrigerator installation would be free, so I'm feeling better about spending the cash.  The good news is he does all kinds of handiwork around the house.  Just call him ... but don't be in a hurry!! 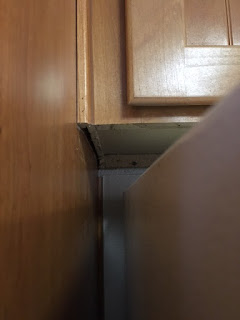 Just then we turned around to find my computer and table covered in sawdust.  WHAT HAPPENED??  None of us noticed as he vacuumed, the dust went in one side and out the other.  Seems the filter came off inside the machine.  What a mess!!  That's more like what would happen to ME!  They cleaned up every spec of dust.

The best news yet is my new fridge will be delivered TOMORROW!!  YAY!!!  So it paid to have a little patience.  Okay, I admit I wasn't patient at ALL.  I just really didn't want to go stand in line at Lowes.  I figured if I procrastinated enough, the fridge would just magically appear.

As a reward, I slathered my morning bagel with this wonderful jam Lynn brought as a house warming gift.  How sweet was that!!  Tomorrow I'll put it back in my NEW fridge. 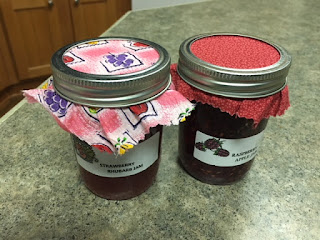 As much as I would like to snuggle with my puppies, I hear Harbor Freight calling my name.  I just might have to go see what new tool I need to repair underneath one cabinet and to cut up Jonathan's chew sticks.  Besides, nothing is as attractive as a gal with a skillsaw, right???