It was pretty crazy yesterday, running around like a chicken with it's .... well you probably know the saying.  I packed up in Yuma, backed out MUCH better than I pulled IN to the Warner RV Park space and hooked up the jeep for the trip to Quartzsite.

Fuel was the first order of business and I discovered something new.  After all these years of NOT using my Flying J card because of password problems, the nice kid said all he had to do was scan it and the discounts would be given whether I paid with another credit card or just cash.  NOW you tell me!!  $2.65 a gallon.  I filled up in California at $4.89

Surprisingly, it was a nice lonely, leisurely drive all the way.  There was no traffic at ALL going my way and only a few rigs coming the other direction.  I thanked the Border Patrol for helping keep us safe and lucked out that all the flooding in the whoop-dee-doos had dried up.

That's when some idiot tried to run over me.  Turning right at a green light, I had the right of way.  Some guy in a huge truck and fifth wheel coming at me, decided to beat me to the punch.  He almost hit my rig as he made his LEFT turn, swerving to miss the guy at the red side of the light.  I honked LOUDLY.  I LOVE those air horns!!  I hate those idiots!!

He punched it.  That's when I saw in my rear view mirror, stuff flying all over the road.  Ha!!  I honked three or four more times ... longer and louder.  His biggest bay door had come open and with his speed, stuff was flying out everywhere.  Serves him right.  He finally saw what I was honking at and pulled over.  I passed him by.

Once I was parked in this EXPENSIVE little place, I took a deep breath and sat with the puppies for all of ten minutes.  I stay here a lot, but never during the big tent week, which explains the price, three times normal.

I immediately received a text from one of the Knights of the Round Table at Bingo.  He and a big group of Montana Owners were parked North of town.  He was saving a spot for me, not knowing I had already paid for this park months ago.  Come on out he said!!  It's easy to find!!

I'm sure most of you have driven around and around this area looking for someone.  The roads are numerous and every cactus looks the same.  Turn at the big cactus just doesn't work.  Yes there are signs, 12" x 12" ... a hard read when you're 100 yards away and driving.

After a couple of wrong turns, I finally discovered their HUGE crowd, all parked 10 feet apart.  Good heavens ... give me half an acre and I'm happy.  I'll stay where I'm camped for the time being.  At least I've got THIRTY feet between rigs.

On the way back, I discovered I was starving.  With all the rally food gone, there's not a single thing for dinner except ice cream bars (at least they don't have to be cooked).  Recognize this box? 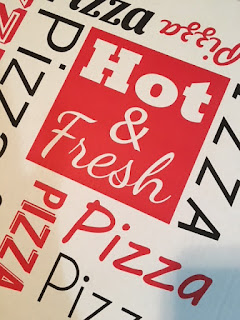 YUP ... I called in an order to Silly Al's pizza, thinking since it was 3:30, I'd have no trouble finding a parking spot.  Ha!!!  The place was packed to the brim.  Thank goodness for skinny jeeps, as a spot opened up just as I pulled in.  Not big enough for the big trucks, they left it just for me. 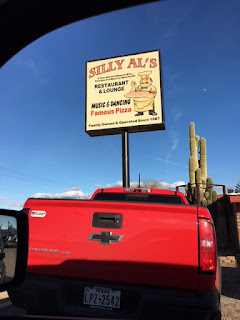 I savored every bite.  This is the best pizza in the West.  Leftovers will make up six more meals. 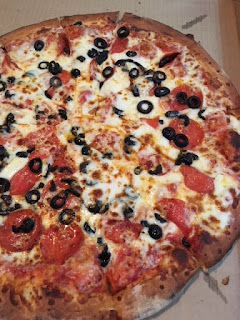 I did take a quick spin around the block at the flea market.  Although there were a lot of cars, I didn't see many people at all.  Traffic was moving right along, not the usual wait in line for several minutes. Apparently the Rock and Gem show just finished in time for the Sell-a-Rama (starting tomorrow) and the Big Tent show beginning Saturday.

I really didn't want to stay that long at all.  I've got a house in Tucson to work on, but we shall see.  Today I'm off to visit with RV friends I met through their blogs.  That's another "turn right at the cactus past the dump station".  The candy cane has been replaced with a wreath ... turn there.  LOL

I don't think I ever showed you the actual ice cream from the rally.  I have to say this is one of the best I've ever eaten.  If you like small portions, as in bars instead of bowls, try Costco's Kirkland bars.  The thick chocolate covering is reminiscent of Magnum bars.  Everyone said they were DELICIOUS.  The best part is you get 18 for $9.99. 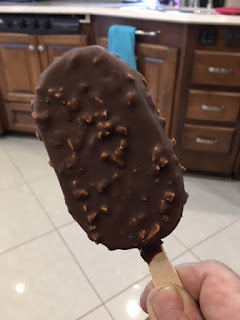 I was hoping to hit the flea market for a time today, but with Cooper rather under the weather, I'm not sure that's going to happen.  I AM determined to find my friends in the desert, but I'm getting a full tank of fuel in the Jeep, just in case.