I'm still getting used to the desert.  There are actually seasons here, unlike where I stay when in California.  It's cold (and apparently snowy) in the winter, causing most everything to hibernate.  At 36 degrees this morning, I completely understand.  Being underground is like having an electric blanket.

I can't tell you how happy I am to have scorpions and spiders hiding away and NOT visiting me.  That one in the tub when I arrived was just a fluke.  He died by the time I got up the nerve to get him out.  Starvation I assume.  Not sorry!!

I was lamenting the lack of critters last night ... no bunnies, no birds, not even the wail of a coyote.  I have literally seen nothing since arriving.  Wasn't I surprised at the late night visitor who came calling. 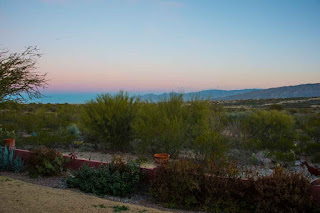 Not the human variety, and NOT the refrigerator guy who has now left me standing TWICE!!!  We'll talk about that later.

It was the four legged kind looking to sneak a nighttime snack.  I heard him yi-yi-yi over the television.  I hit mute.  He called out again, louder.   Hey puppies ..... we have a visitor!!  I walked to the sliding glass door and opened it to hear better. 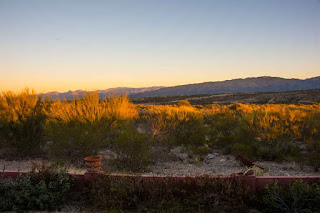 Hey Mister Coyote ... if you're looking for a meal, you should probably be a little more stealthy!!  I closed the door and sat down.  The wailing got louder.  Back to the door I was totally surprised to find him screaming at the very corner of my little two foot tall concrete block fence!  YIKES!!!  He was BIG and LOUD!!!

That's when it happened!  Cooper didn't like him getting so close and made a beeline for the door, barking his crazy "someone's out there" bark.  He and the coyote talked back and forth, with me trying to hush Cooper by flailing at him with my foot.  Then the coyote did what coyote's do.  He yipped quickly once or twice ... then again.  Then it was back to full blown howling.  Yip yip again.

Here's what I learned many moons ago on the ranch.  That's how coyotes get dogs to follow them, taking them way off so the waiting pack can attack.  It usually happened when we were on horseback in the far reaches of the property.  The coyotes yipped and the dogs ran after them.  We would have to race after the coyotes on horseback, chasing THEM off in order to save the dogs.

Here's the good word for the day.  Never EVER leave your pets outside alone for any reason.  A coyote can lure them off in a flash.  If you tie your baby up, you just provided lunch for a hungry critter.  Think they don't come out during the day?  Yes they do.  Think they don't go around a crowded town or group of RV's during the day?  Yes they do.  Keep your babies safe my friends.  Keep them inside unless you are right there.

Cooper did get in the last word as the coyote wandered off looking for another meal.  I warily stepped outside on the patio.  That's when I almost got hit in the face.  Having just put my hummingbird feeder out a few hours earlier, I figured I could leave it all night.  WRONG!!

A huge bat did a fly-by around me and straight to the feeder, where he hung in mid air sipping the sweet nectar, the same way hummers do.  I grabbed my camera, but even with it's night vision, the bats were too fast to get any images.  I brought it in for the night. 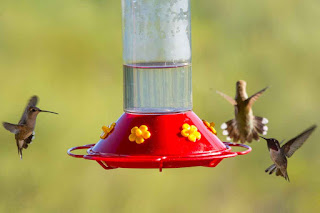 In other news, that darn refrigerator/cupboard-cutting guy never showed up, nor did he call me this time.  That's two days I've sat here waiting.  I'm not a happy camper.  Here's my question of the day.  I can cut that out myself if I have the right tools.  So what should I use?  A skill saw?  Maybe a router?  Or just a jigsaw?

There's no way to raise the cabinets since one end goes all the way to the floor.  It's not going to be easy hanging upside down on a ladder to get it done, but I'm determined.  That half inch HAS to go!!