I don't usually post this kind of stuff because you never really know if anything on the Web is true or not.  In this case, it's something I've always worried about, just a little in the back of my brain.  It's why I traded in my fifth wheel for a Class A rig.  I can park it at night, never even opening the door and keep it locked until daytime.

Turns out you CANNOT believe things on the web.  I deleted all of this story.  Someone called the number and found it to be incorrect.  So now they say a repo guy was looking for the trailer.  Either way, true or not true, you can't believe everything you see on the internet.  Now I'm wondering about all those missing kid ads I've seen!!!!!

On to the business of the day .... I'm STILL waiting.  Here's pictures of the problem at the top of the fridge.  This is where the half inch across the bottom needs to disappear. 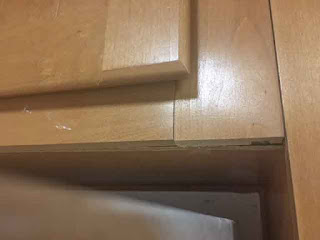 It's going to be easier than it looks, as I've already taken this sheeting off.  There is just enough "lip" to be removed to allow the fridge to slide underneath once it's gone.  The sides don't matter since the fridge is not that wide.  The main problem will be horizontal cutting.  I'll need a guide which I think can be clamped on if I remove the doors.  I would still rather have someone ELSE do the work!! 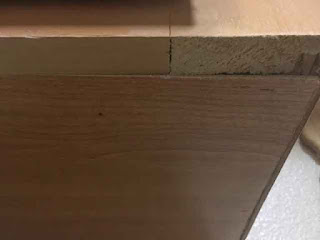 So .... I received a message from Mrs. Chance yesterday that they were leaving for the fairgrounds at 11:30 to watch the granddaughter ride her horse in gymkhana.  I changed clothes quickly, watered the puppies and headed out the door with my camera.

That's funny ... as I pulled in to the fairgrounds I didn't see one single horse.  A couple of dinosaurs, but no horses.  The dinosaur extravaganza has hit Tucson.  I don't know if you've ever seen this, but it was pretty fascinating.

I only got one picture which I'll show you tomorrow because everything was blocked off, making you  PAY for the experience.  I didn't want to pay.  I did call Patty to learn the gymkhana was SUNDAY.  It was Sunday they were leaving for the fairgrounds.  Somehow the word Sunday escaped me.

Back to the house with nothing else exciting going on, I decided to whip up a batch of peanut butter cookies.  Anyone else not familiar with a gas oven?  Never in all my years have I had to bake with gas.  It is NOT the same as electric.  My range has a gas stovetop and an electric oven.

First off it took almost 30 minutes to come to temperature.  I heard whooshing noises that were a little scary and saw fire underneath the floor of the oven.  The first batch came out black on the bottom and raw in the middle.  How does that happen?? 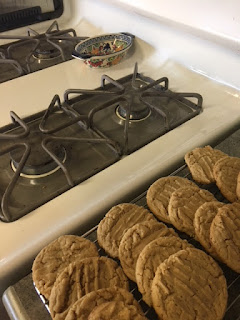 They'll be fine .... a little char never hurt anyone.  I raised the rack to the middle.  That batch came out a tad bit overdone on the bottom, but at least they weren't black.  Still, they were not done even a little bit in the middle.  I left them in for another two minutes.

Finally, in desperation, I moved the rack to the very top and baked the last batch for three more minutes than the recipe said.  YAY!!  I finally have twelve edible cookies out of three dozen.  Maybe the coyotes will like a little cookie snack.

So what's the secret?  Always keep the racks on the top of the oven?  I ask only because I've got half a turkey in the fridge to cook today and I would rather it not be black on the bottom and raw in the middle!!