Another day at the FMCA Western Motorhome Association Rally in Indio California.  After a morning of sleeping in until 4:30, I got busy gathering up stuff for the Chapter Fair.  The candy is most important of course.  Whoever has the best candy gets the most new members.  I'm proud to announce we have at least SIX new members. 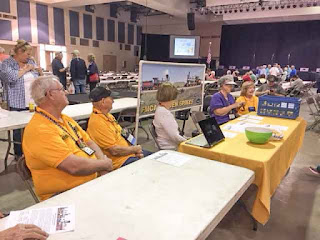 With that out of the way, I headed back to the rig to meet Shade Pro.  Having made an appointment the previous day, I expected them at 2:30 or so.  At around 1:00 I arrived to find him already working on it.

The cord holding the fabric to the roller end had worked itself out about 12 inches.  I figured at least a $100 bill ... you know, pocket change ... to get it fixed.  In less than one minutes, he was done. NO CHARGE!!  Are you kidding??  I didn't tell him how much I expected to pay, I just thanked him a lot and went on my way ... back to the Chapter Fair where we were stuck until 2:30.

Back at the rig, I tried organizing the fridge but became frustrated in a flash.  There's just too much stuff in there.  I thought to take the puppies for a walk along the Hollywood Boulevard of Indio before beginning my dinner contribution.

I'm sorry to announce there were only a couple of Phaetons.  I was not impressed.  Mine is SO much nicer ... and roomier.  THIS one however, the Entegra is a showpiece.  I'm not sure my dirty cowboy boots would fit in here well at all.  With two theatre seats on the left and a long couch on the right, I suppose I could get used to it. 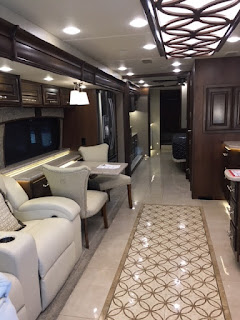 It has about the same kitchen space as mine, but only a two burner stove.  I would have to dig out my dutch ovens for outside campfire cooking I guess.

Back to the bedroom, it's roomy and elegant, to say the least.  I'd change out that fancy bedspread for a nice quilt. 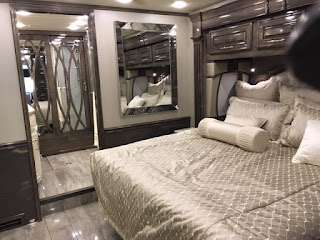 Keep going and you end up in the HUGE bathroom with not one, but TWO sinks.  I suppose I could live with that too, but the shower would definitely NOT be fun.  Who wants to spend an hour wiping all the water spots off the see-through glass.  Besides, it would probably scare the puppies to see me in there. 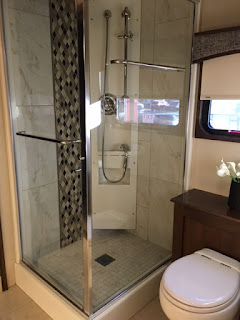 I might add, there were TWO bathrooms in that beast and I'm SURE I saw two showers as well.  That's TWO much cleaning for me!!

This is the second Entegra available for slightly less, but I don't care for the floor plan and I think dry camping would be a challenge with all those lights!! 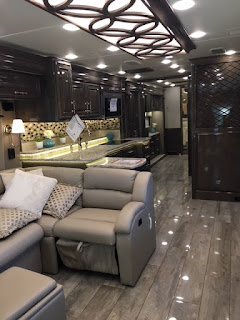 On the other hand, here's the Phaeton.  Not quite as fancy.  I like mine MUCH better.  Surprised?  Me too!!! 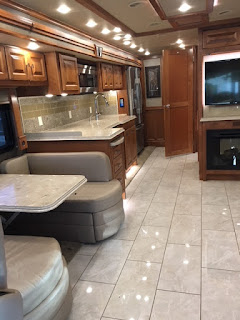 It DID have an interesting feature however.  This is a walkthrough bathroom, meaning you can access the bedroom from the main door, or walk through the bathroom to the bedroom.  Kind of a cool feature.  Oh ... and practically every single rig has a fireplace.  That's something I could use. 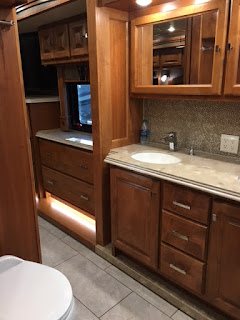 At long last it was getting close to dinner time.  When I learned we had only four small pork loins for 30 people, I made a quick trip to Costco for two huge pieces of salmon.  There were NO leftovers, so it was a good call.

I know you are wondering about my one beater mixer.  The Westerfields graciously offered their Black and Decker for my use.  If you want power, it's got it.  It took me a second to get it turned off before plastering a little potato on the walls, but in the end it worked perfectly!!

After dinner, we were entertained by the Guitar Guy.  We hire him every year.  He's a kick ... a great entertainer ... and likes it if we dance, holler and otherwise sing loudly off key.  We accommodated.  I would have pictures, but alas, you will have to wait.

You never know who you will meet at a rally.  Yesterday, it was an NBC photographer who happened to be here learning all about being on the road in a rig since he is retiring in a few days.  He also just happened to have finished shooting the Golden Globe awards and left his card reader home, like all of us do on occasion.  There's no viewing images on your computer unless you transfer them with a reader.

He was referred to me ... and of course I had a reader I could loan out.  That means I don't have a reader for MY card which has all of my Guitar Guy images on it.  Sorry, you will have to wait until tomorrow to be regaled by my magical photography.

In the meantime, I'm on the hunt for chassis batteries.