A Menagerie of Stuff

First off, in case you were wondering about Dairy Queen's Kansas City pulled pork on a pretzel roll, it is one of the best sandwiches I've had in quite a while.  They could have left the dill pickles off for me, but it was VERY tasty and well worth the $5.99 price. 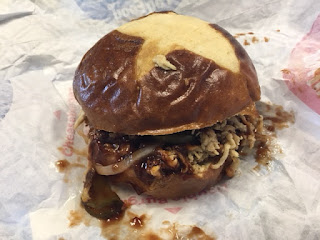 Having heard company is coming tomorrow, Jonathan took a bath, then sat shivering in the early morning cold.  Silly bird!  I had to grab a towel and "burrito" him (wrap him up like a burrito) to help dry his wet feathers.  Believe me, he was none too happy about THAT!! 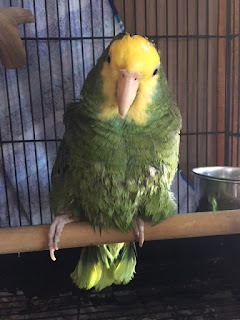 Quilting with friends turned into a chat fest and we got very little, if any, sewing done.  They helped me choose borders and showed me a new app for my phone that does all the figuring for you.  After a great lunch provided by Chef Patty, we all headed our separate ways to go home and actually sew.

Since Patty donated that turkey I was going to cook, I took her suggestion to cover it with bacon.  She just happened to have a package available.  On the way out the door, who should come to visit but Mr. Roadrunner.  He jumped right up on their porch to say hello. 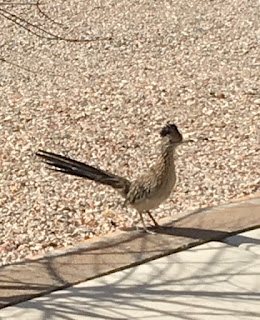 Back home as the turkey cooked, I worked on my latest quilt, noticing all the while that the heater had not come on.  That's weird.  I walked in to the kitchen to find the oven venting into the room.  I've never seen that before.  Just so you know, it's not a good idea to leave those chocolate chips sitting on the stovetop where that vent is.

Two hours later I had a tasty dinner of crispy turkey flavored bacon.  Who wants turkey when you've got BACON!!!  Add in a little asparagus and it was dinner!!  I'll try out the turkey today for sandwiches. 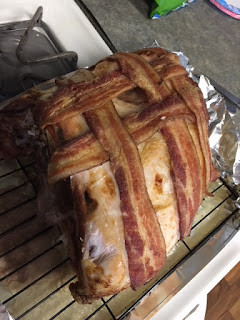 I still haven't heard from the cabinet cutter guy, so I'll make a trip downtown today to see what the problem is.  I did find a YouTube video about cutting the bottom with an oscillating saw.  It was pretty small and hand held, so if the guy doesn't show up, I have an alternative.

In the meantime, I have some housecleaning to do for company coming tomorrow.  I'm excited to see Lynn and Dave Cross, RV friends from way back!!!  To make it even better, we're going out to have pizza for lunch.  You didn't think "I" would cook, did you???  No way would I subject them to that!