Life goes on, as the song says.  I have to admit though, I'm getting pretty tired of this staying home puppy sitting thing.  I feel like I've been sitting forever.  If I get up and move, Cooper gets up and follows me .... not so good for someone who is supposed to be resting.

I drug two of my kennels out of the garage to test for travel.  He refused entry.  I could stuff him in, but am afraid I'll hurt his back.  Food is not an incentive with this kid.  If I get in, he'll get in and I don't quite fit.  Nonetheless, he will have to travel in it when we head out.  Otherwise he will jump up and down off the couch.

In the meantime, I think I've logged 3,000 hours on my phone trying to keep busy as I sit on the couch cushion on the floor.  I've tried sneaking up ON the couch, but as soon as my ankle cracks, he's awake and wants up.  I've created a monster.

I was finally able to finished the binding on this crazy quilt.  Does it look like the 80's to you?  It reminds me of my brown shag carpet and orange couch.  Honestly, I really need to make these a little faster.  I love the material when I buy it, but a year later I wonder what the heck I was thinking!! 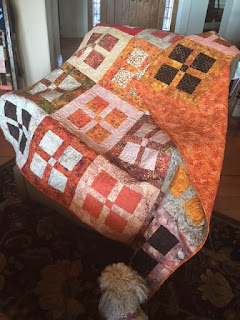 Such a little angel when he's asleep.  I decided to go for the air mattress yesterday.  Boy did THAT bring back memories of camping with the critters.  We all had small blow-up mattresses that became part of the sandwich.

The layers included a huge pile of pine needles we gathered, a large canvas tarp, the air mattress and our sleeping bag, topped by the folded over tarp with our levis for a pillow.  Unfortunately for us kids, it didn't keep out the bugs, the snakes or the bears.

By morning the air mattress was always flat, which didn't really matter to me since I could never stay on it anyway.  I always rolled off.  Every night we had a blow-up-your-air-mattress ritual.  I have discovered I'm WAY too old for floor sleeping now. 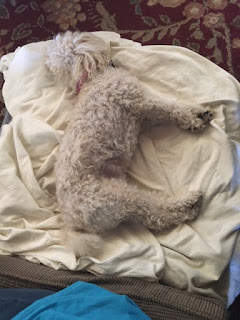 Too late to travel due to traffic, I consoled myself with a grilled cheese tomato sandwich.  I didn't grow these, the Castle Lawyer did ... and WOW ... they are delicious!!  I had forgotten what a REAL tomato tastes like.  There's nothing like an ooey gooey grilled cheese sandwich to make me a happy camper. 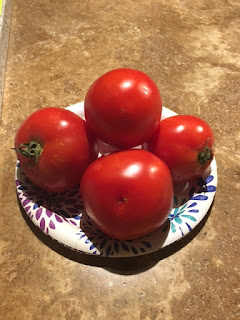 So this was my bed for the night.  You would think the couch would be more comfortable, but it's not.  I laid out cushions, covered it with a blanket and propped myself up to watch the Giants ball game.  Surprisingly, we won against the Diamondbacks and surprisingly, it was pretty comfortable.

I probably should be rooting for Arizona, but to be honest, I just don't like their announcers.  They always have something good to say about their team, and something not-so-good about everyone else.

Finally .... lights out.  I stretched out on my "bed", feeling pretty good about the night to come.  That's when Miss Jessie decided SHE should sleep on the bed too.  I tried to shoo her away, but she was having none of it.  It was a tight fit. 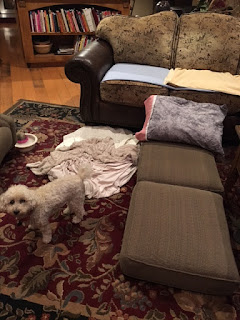 I'm determined to get out of the house today.  The puppies usually sleep pretty good in the mornings, so I'm locking them in bathroom jail and heading out.  I probably won't get too far since my hips aren't happy with me.  Hopefully I'll be able to heal up from all this one day.

I'm not sure what I'm going to do when I hit Arizona.  That bed is also too high for Cooper and I imagine he will have to sleep on the floor, which brings up another problem.  He's the only dog of dozens in my life that I've not been able to house train.

Oh he's great if I leave the door open, but that invites burglars, snakes and coyotes.  I do have a large round fold-up kennel that I'm hoping works.  DING!  The light bulb just went on.  Hey ... maybe I should try that now!!  It would be perfect for him to sleep AND travel in while on the road!!  I'll let you know how it goes.