Since the huge downpour of rain that was supposed to hit central California didn't materialize, I decided to take my knitting problems to a new store, just opened in Modesto at Roseburg Square shopping center.  Here's a picture of the new store.

You guessed it ... there was no store.  A few months ago, there WAS a yarn store called Urban Sheep at that location. When I heard they were closing, I was very sad, as there are no other yarn stores in my area.  So later, when I got a message via the grapevine that a local friend of a friend was opening a yarn store in that shopping center, I assumed it was the Urban Sheep.  I was soooo excited, I set off yesterday to check it out.  I guess I should have called first ... because the above picture was exactly what I found!!  Even after driving around the parking lot three times, the yarn store did not magically materialize!!

As I sat in the parking lot, I pulled out my iPhone and googled Yarn Stores.  Wouldn't you know, I found a great one in Sonora, where I just was last week!!!  I'll be moseying up that direction soon!!

For those that haven't heard about it yet, Miss Terry Russell of Nick and Terry Russell Gypsy Journal RV fame, has at long last published a cookbook of her tastiest recipes, all suitable for preparing in your RV kitchen.  I spent the first day reading every single recipe and making my shopping list.  Today I hope to begin a marathon cooking experiment and make every single one ... but not in one day of course!!!  You can get your copy by clicking on this link Miss Terry's Kitchen.  It's a Kindle Book ... but I imagine they will have it available in other versions soon.  I stole this image from Nick's Blog site ... just so you know!!!  So it's a big YES-GO TO AMAZON and purchase her book.  If enough people buy, maybe she will share more recipes in Version II ....... 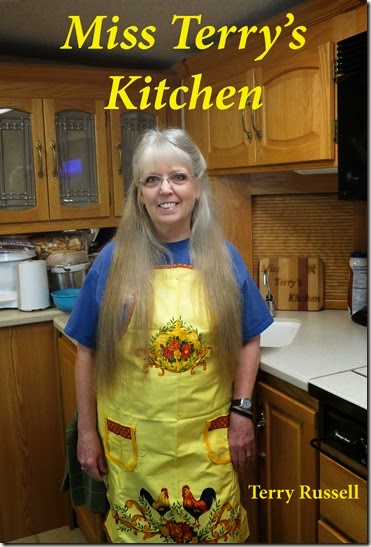 Posted by Nancy Kissack at 7:31 AM