Plans Gone Awry or I'm In The Jello!!!

The best laid plans can change in an instant, so as a true RV'er, I accept the JELLO concept and roll with the punches.

The trip to the game refuge and Columbia sort of got waylaid by the discovery of a yarn store in Sonora.  The project I started that has been causing me so much trouble, was begging for a stop at the store to see what the Knitting Doctor's recommendation would be. 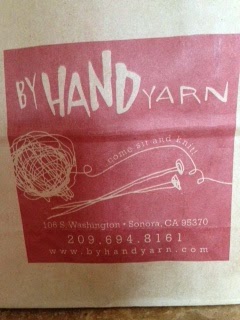 I met a lot of wonderful women who were VERY friendly and invited me to join them.  Terry, who was running the shop Sunday, took my mess and began to tink (knit backwards) 8 rows ... getting me back to a place where I could begin again with the correct count and fixing some bad mistakes ... honestly not that that will help ME, but at least she did say I was doing the stitches correctly!!  This used to be the drug store in Sonora and still has all the original shelving in place, along with spindles at the top, all Mortar and Pestles.  LOVE love these old buildings!! 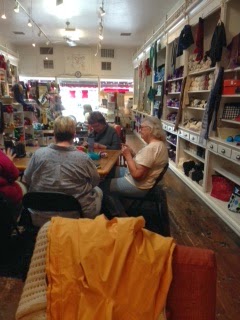 While she worked on that, I stalked the store with a yarn addicts eye and picked out several skeins.  Then she convinced me to head off to Columbia for my photography, which I will post tomorrow, while she finished the undo of the year!! 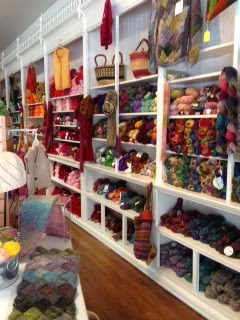 She worked on it until the shop closed at 4:00 ... except she stayed until 4:30 ... when I convinced her I could finish the "undo" ... and I headed back down the mountain, more yarn and patterns in hand.  Once home, and dinner (such as it was) under my belt, I let the dogs out ... at which time I heard a scratching and Jessie took off in a flash.  Of course calling her was a big waste of time ... once on a cat, or squirrel, or gopher or whatever, there's no returning until the creature screams uncle.

When she did finally return, she was acting funny ... so I knew immediately something was wrong.  I found a one inch gash in her skin on the shoulder.  I'm guessing she tried to climb the fence after the cat and got hooked on a nail.  It wasn't deep enough to get the muscle, thank goodness, and wasn't bleeding much at all ... so I patched her up best I could. 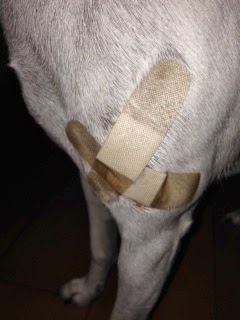 At 9:00 Sunday night, there wasn't a Vet in sight and since I have to take Showby horse in today, she's going with me for stitches.  Believe it or not, those bandaids are STILL stuck on her this morning.  Such a sweet girl, she's sleeping on the couch as we speak.

With WAY too many people in Columbia, I didn't get all the images I wanted, and left early due to the Knit Doctor's schedule ... but I did get enough to know I am thrilled with the camera!!  Stay tuned for tomorrow's pictures.