You read it right ... and it's our lovely government that's behind it.  If you're a liberal, you probably don't want to read any further.

I've spent my life trying to BE and REMAIN healthy.  I quit smoking six months after I started, I never smoked or used any kind of illegal drugs, rarely drank alcohol and I've exercised much more than I ever wanted to, just so I would remain healthy as long as possible.  For all this hard work, I'm now being penalized by our government, who thinks they should have their big fat nose in my business, controlling every aspect of my life, while their hand is in my pocket stealing my hard-earned money and giving it to people who won't lift a finger to help themselves, DEMANDING we pay their way in life!!!   Here's the story.

Once dumped off the County's insurance rolls on to Medicare, and finding out they are now cutting THEIR share of the supplemental insurance to $100 a month (previously around $300), I was told to contact AARP United Health Care.  By the way, United Health Care is a private insurance company that PAYS AARP for the use of their name.  As it was explained to me, I have to pay UHC the full amount on the first of the month for my supplemental insurance.  The County will pay their $100 share to UHC at the END of the month, at which time I have to send in a coupon in order to get that $100 back in my bank account the following month.  Pretty stupid if you ask me and an accounting nightmare, for which they get to charge more.  Why don't I just pay UHC the difference????  I guess that would just be too easy.

Next, since none of the insurance up to this point pays for prescriptions, I have to pay for Part D coverage.  UHC sent this booklet, at which time I called their office for some explanations.  That's when I learned of the extortion!! 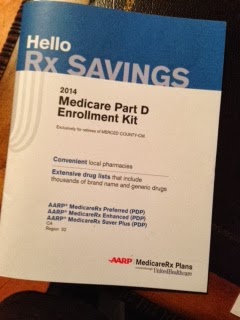 BUT WAIT!!!!   Here comes the extortion part ... she said if I decided NOT to purchase coverage now, and down the road I got sick and NEEDED the prescription coverage, the government would penalize me 33 cents a month, for every month I DID NOT SIGN UP and it would be added to the monthly coverage cost, EVERY MONTH.  Well you can imagine the words that came out of MY mouth!!!  You've got to be kidding ... so the government and United Health Care are sleeping together I see!!  "Oh my she said ... this is being recorded you know!!!"  Hell if I care ... just WHO gets the penalty?  "Well the government of course!"  After many more words I won't put in writing, she asks me what would I do if I got really sick and needed very expensive medication??  I'd go to Mexico I said, where the drug companies aren't making billions ... or possibly Canada.  Worst case, I'd just kill myself ... I've lived a nice long life already!!  Well THAT set her off big time!!  "THIS IS BEING RECORDED!!!"  Doesn't change anything I said ... United Health Care and the government are ripping people off, trying to force me to pay for insurance that provides NO benefit to me AT ALL for an indeterminable time.

The final result is I declined Part D coverage and will be subject to the penalties if I sign up at a later date.  Why would I pay a minimum of $368.00 a year for meds that cost $56??  Talk about making millions ... the insurance companies are cleaning up here!!!  Even if I get sick and need coverage, the penalty is cheaper.  My MAIN bitch however, is just who the hell is the government, telling me if I don't buy this insurance now, I will be penalized later!!!  Like Obama's healthcare ... you're penalizing people who can't afford the insurance just to put money in YOUR pocket that I'm sure down the road will be used for other purposes, like salary increases!!!  I don't want to offend anyone, but 90% of the costs from our local hospital are for people on welfare.  Here's an original thought ... don't provide those services for free!!  Deduct it from their welfare check!!!  If the government wants to throw money away, throw it in the direction of the Veterans who fought to keep this country FREE!!!  I hope I'm dead and gone before much more of this kind of government extortion takes place!!

Thanks for letting me rant!!  It won't change anything, I know ... but maybe if enough people complain, the baby boomers can vote out the guys giving away free money!!

Posted by Nancy Kissack at 8:00 AM