There's nothing better than good food (and the preparation of same) to get your mind off the stupid government we now have in office!!!  It was time to get the smoker out and try something new ... Baby Back Ribs!!!

So far, everything I have cooked in the smoker has come out delicious!!  There are as many ways to smoke different cuts of meat as there are people owning smokers, but if you read through the recipes and tips, you'll find one that sounds good to you.  For ribs, I found the 3-2-1 method which seemed to fit the bill, including the fact that for the smaller baby backs, it's 2-2-1, making that delicious meat available for eating an hour earlier!!!

First off, baby backs are NOT for the faint of wallet!!  In this welfare town, they are hard to come by ... so when I made a trip to Turlock a couple days ago, I stopped in at Safeway!  Not the cheapest store by a long shot ... but at least they HAD the ribs I wanted.

Now for the mustard rub.  Just like the pork shoulder, I rubbed the ribs with plain old yellow mustard, merely as an easy way to adhere the spice mixture.  Don't worry, once smoked, there is absolutely NO mustard flavor. 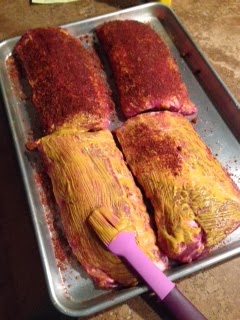 I quickly found that there are as many spice rub recipes as there are people who smoke meat!!  Guess I'll just have to keep trying different ones until I find the "perfect" one!!  THIS time, I tried Kansas City BBQ ... a mixture of brown sugar, paprika, garlic, onion, salt and pepper.  For the big pieces of meat, I leave it in the fridge overnight.  For these ribs, I rubbed it on and let it sit on the counter for an hour while the smoker heated up.  It's always better to let the meat come to room temperature before smoking ... or so I have been told!! 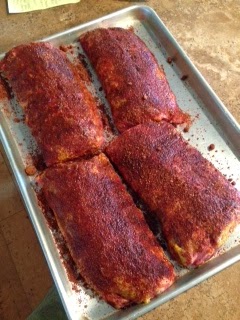 Then it was off to the racks!!!  The 3-2-1 method goes something like this.  Smoke the ribs for 3 hours, turn the smoke off and wrap the ribs in foil.  Put them back in the smoker for 2 hours, then unwrap and return them to the smoker for the last hour.  For baby backs, since they are much smaller, change that to 2-2-1.  This won't win you any barbecue contests because the meat just falls off the bone.  In a REAL contest, the meat should stick to the bone slightly ... but I really like that fall-off-the-bone tenderness!!! 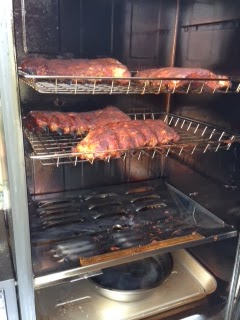 While the ribs were smoking away nicely, I started the first of Miss Terry's recipes ... Nick's favorite pizza!!!  With King Arthur flour in hand, I whipped up this nice ball of dough.  After this picture, the kneading began!  For ten minutes I pretended it was Obama's head and pounded it senseless!!!  Then I used my sharpest knife and whacked it in half!!!  It's presently in the fridge blowing itself back up again with lots of hot air!!!  I'll finish THIS story in a couple of days!! 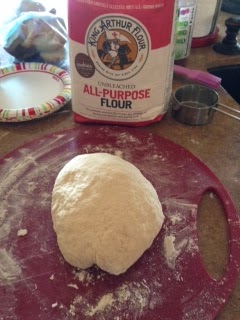 Finally the moment of truth ... the ribs are done!!!  As you can see, it didn't take me long to scarf down several mouth watering, Mmmm Mmmm good pieces of tender delicious pork!!  They were wonderful if I do say so myself!!!  Adding a little Sweet Baby Rays BBQ sauce only made it better.  I wrapped up one rack and dropped it off to my girlfriend at the local radio station.  The guys went wild!!!  This might just turn into a nice side business!!! 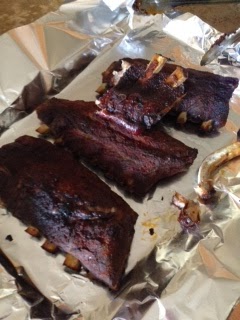 I spent the rest of the night at the local Elks Bingo, where I volunteer as a cashier.  It was nice to be reminded again of our local welfare state, where people actually count out pennies so they can gamble and lose ... to the tune of $6000!!  But that's okay ... I was just remembering those wonderful ribs and the pizza that was on my menu for this weekend!!!