You always get new neighbors in RV parks, as some pack up and head out on their adventure, others arrive and begin their adventure as your new neighbor.  At 9:30 last night, these wonderful people pulled in and attempted to park directly behind my rig.  30 minutes later, they finally had the fifth wheel  in place.  I thought about offering to park it for him after the first 10 minutes, but when I peaked out the door, I realized that wasn't an offer that would be appreciated.  At that point, the door slamming began.  I not sure what you could be doing getting in and out of your truck 8 times after the rig is parked, but they definitely did ... and they slammed the doors loudly, just to be sure they were shut each time.  This morning, early, I snapped a picture for you. 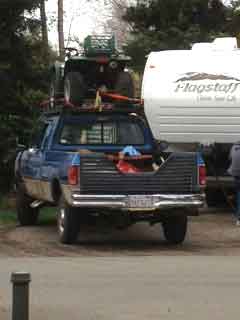 I'm not totally convinced this is a safe situation and I'm amazed that they didn't get a ticket from the Highway Patrol.  Maybe there isn't a law on the books for this one!!!  I have no idea how they got their ATV up on the roof, but so far they haven't taken it down.  I would like to see that ... I bet it would be entertaining.

The Group Hosts at our little rally had the local Chico Fire Department stop by for some fire safety tips.  Two very nice, knowledgeable firemen (one fire woman) spoke on all things fire-safety related --- in your home.  They didn't really have experience with RV's, so we helped them out and gave them all the information they could possibly want!!!  Several had been to Boot Camps and seminars, including myself.  When they recommended getting the "hang on the windowsill" portable ladders, I politely protested.  Open the window, through some bed covers over the edge and GET OUT feet first, as fast as possible.  They were rather resistant about some of our recommendations, but I think in the end decided they were out-numbered!!  The best thing they did was bring their "put out the fire" demonstration equipment, and with some prompting, ALL the women tried putting the fire out with rather large extinguishers.  It was great learning experience for them. 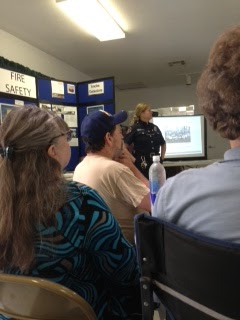 I had a request for Easter Hat pictures, but could only find one willing to pose for me.  I think this was a sneaky way for the Hostess to get rid of her old decorations and ribbon.  I heard her say she was soooo glad those pink roses were gone!! 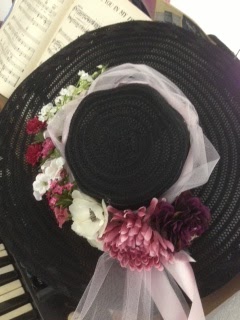 While getting groceries a couple days ago, I discovered a yarn store.  Any men reading this, can just skip this paragraph!!  Knitting and crocheting has become a lost art, so when I spy a possibility, I have to go visit.  This particular store was one of the best I've ever seen.  I was in heaven, surrounded by skeins of the most beautiful colors EVER!!  I wanted to buy everything!!  Unfortunately, I crochet ... most of the creative patterns (and prettiest things) are knitted.  Unlike most stores, you can actually purchase display items here.  I loved this $10 scarf (on the left, made with about $40 worth of yarn) and purchased additional yarn to make a couple more.  I think I can knit well enough to do these small projects.  Maybe some day I can come back and take a few classes. 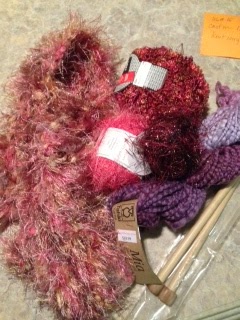 Another great potluck dinner, another puzzle and it was back to the rig for a little TV, a little crochet and some Cooper love ... 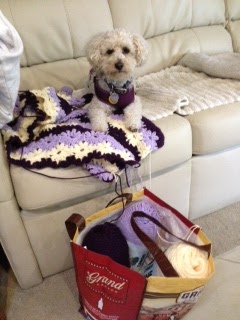 and THAT's when I heard the ruckus behind me.  Hopefully it will be a little quieter in the neighborhood this evening.     Happy Trails .....
Posted by Nancy Kissack at 7:52 AM