Bright and early I was off to an Escapees rally in Chico California at the Almond Tree RV park.  Easy to find, just far enough off the highway to be quiet, they have long pull-through sites with 50 amp service and plenty of room for the puppies.  I think it is $30 per night, but I haven't paid yet. 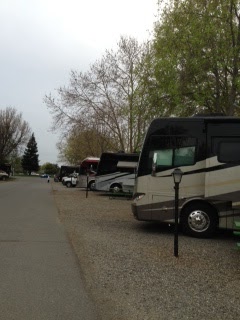 First on my list was a trip to the Bidwell Mansion, now a State Park.  General John Bidwell, as he became known later, was a teacher from back East.  Once in California, he hooked up with James Marshall of Sutters Mill gold rush fame and made enough money to buy a large Mexican Land Grant in the Chico area.  Unlike a lot of settlers, he didn't chase the Mechoopda Indians away.  He not only let them stay on the land for free, he fed and housed them.  He married a gal, Annie Kennedy (no relation to THE Kennedys) 20 years his junior.  In order to convince her, he bought a gorgeous piano .. she said yes.  They had no children and eventually the property came to the State of California Parks System. 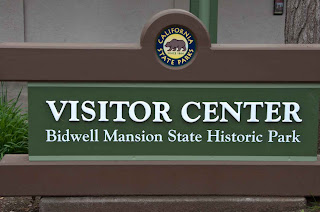 Annie made friends with the Indians after they got over the fact she was a female, and they made many baskets for her, which she displayed in the library. 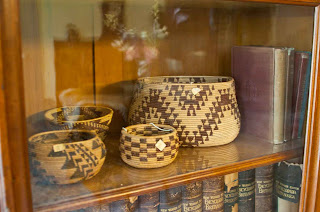 Italianate architecture, there are huge windows in every room so the entire interior is well lit.  John had electrical lights installed, but since electricity wasn't reliable, he also had gas lights in every room.  Also unheard of in 1868, each bedroom had a sink with running water, as well as a bathroom with toilet and bathtub.  How could Annie resist?? 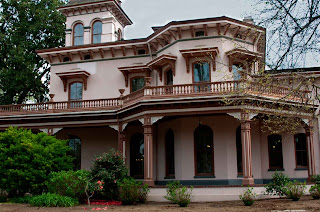 Another appointment not often seen was wall-to-wall carpeting in every room except the kitchen and ballroom.  This house was built for entertaining. 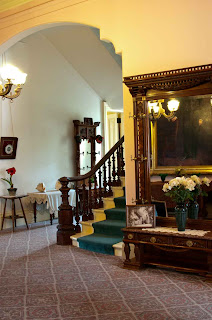 Attention to detail was the job of the architect, who lived in a small brick house out back.  Every stairwell has beautiful spindles. 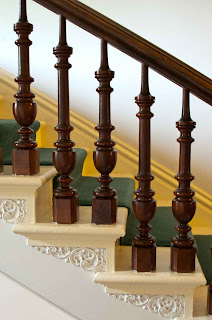 Maid and cooks quarters were located in smaller rooms in the back of the house, but also had running water in a corner sink.  They did not, however have a separate bathroom.  The old tin tub and chamber pot belonged to the maids. 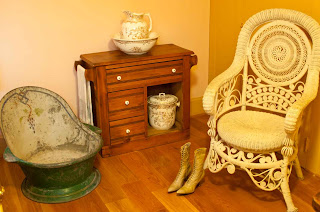 Another invention built into the house were the bells to call the maids.  In every room is a small brass handle.  Turn the handle and the bells in the kitchen would ring a tone for the corresponding bedroom/ballroom/lounge so the maids knew where to report.  A "voice tube" was also built in to the walls ... you could open the little brass door and talk to the cooks in the kitchen. 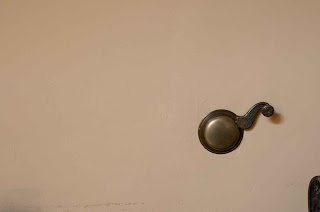 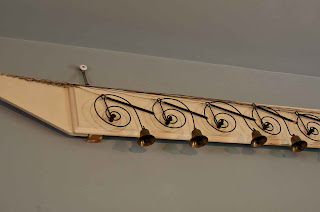 After becoming majorly rich farming wheat and making flour in his mill for all of California, General Bidwell became a congressional member and ran for Governor, unsuccessfully.  During that time he used the mansion for entertaining Presidents and Generals.  The dance hall on the hidden third floor never got used after he married however, since Annie was strictly religious and would not allow dancing.  Pictures show American flags used as drapes in the doorways of several rooms to show his patriotism. 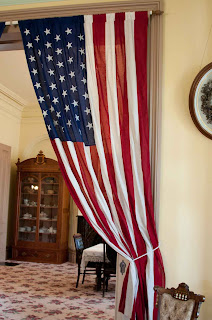 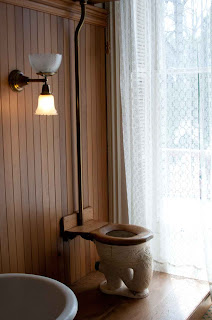 Unfortunately, washers and dryers had not been invented yet.  This is the washroom at the back of the house.  To the right is a small wood stove that heated the water used in the concrete sinks. 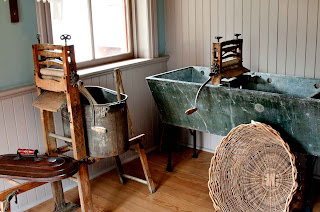 Amazing house and interesting history.  As with all guided tours, I got yelled at and chased out because I wouldn't keep up.  People don't understand you just can't snap a picture with a Nikon camera.  I didn't lean on anything nor did I open any doors (we got death threats for that).  These few pictures just don't do it justice, so if you are anywhere in this area, be sure and stop in.  The $6.00 entry fee is minimal and the history lesson well worth the visit.

Gonna have a little black water and hit the hay.  Happy trails!!

Posted by Nancy Kissack at 8:36 PM