Besides the food, my favorite part of any fair is the Ag Building.  I know everyone goes eewwww when they walk by the stinky building, but to me, that's the smell of home ... of horses and cattle and hay and yes, manure!!  This baby resembles my first and only show calf who had the same fuzzy ears this guy does!! 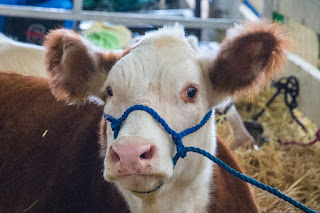 There are two classes you can enter with your calf, goat, sheep, pig or whatever barn animal you have.  The first is all about the animal ... fat and sassy, straight back, well set straight legs, head not too high ... like this beauty.  The second type of class is showmanship, which is all about the kid on the other end of the halter.  You must demonstrate your skill at control of the animal, how you set them up, all the while keeping a close eye on the judge waiting for the nod of his head and NEVER getting between your animal and the judge.  Not an easy task!! 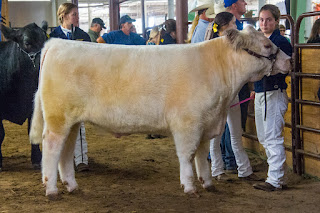 With a couple of exceptions from uncooperative steers, most did extremely well.  Unfortunately, there can only be five places.  It would have been a tough class to judge.  Sanger and Clovis FFA seemed to win out. 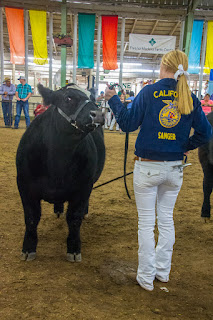 These guys aren't dancing the hokey pokey, they are showing their lambs.  These happen to be the five winners ... three girls and two boys!!  You go girls!!! 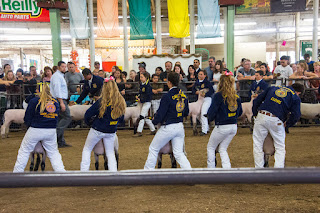 Sheep are very inquisitive.  Every time you bend over the rail to get a picture, they come right up, ruining what just took you two minutes to set up.  Being black doesn't help matters, as cameras don't focus well (or at all) on a black face!!  This antic gets them lots of pets though!! 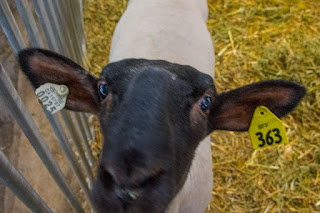 Pigs are another critter altogether.  Although smart, you can't put a halter on them, so they get to run around the show ring loose.  Everyone carries a long narrow show stick to try and guide them around in a circle towards the judge by tapping them on the shoulder.  Sometimes that works, sometimes not. 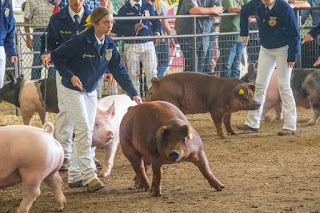 While all the kids were showing their animals, one huge corral of ewes was producing babies right and left as part of the educational part of the Ag building.  As they are born, they are marked with a number that matches mom's number.  Most had twins, but a couple had triplets. 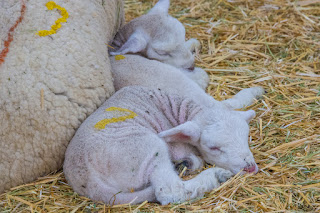 This baby on the left doesn't belong to this mom, and he got a head butt for trying to make friends.  Moms are VERY particular about who gets to eat where. 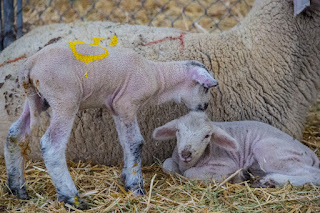 This was a brand new baby getting his first meal.  It doesn't take them long to figure out where the dinner table is!!  Gosh these babies are cute.  I think I spent an hour watching them. 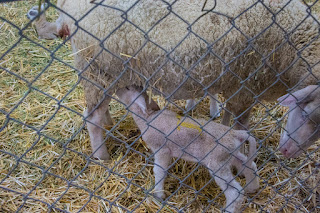 On the far side of the building was Chicken Ed.  Not the food vendor who will deep fry anything, but Chicken Education!  This young 4-H girl had her silky chicken on the table for all to pet while she answered any questions the kids or adults might have.  She's a rock star.  See all those pins on her hat?  They are all achievements she has completed and she really knew her chicken stuff!! 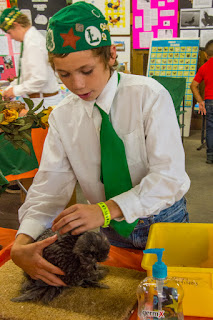 There were lots of chickens, ducks, pheasants and geese, but the goats were my favorite.  This bored baby was standing on his hind legs so he could reach the screen, chewing away to his hearts content.  I can relate to that!! 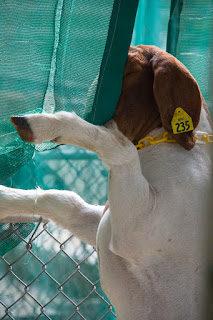 After a couple of hours, the food booth smells were getting to me, so I headed back to the Floriculture building to have lunch with Pat (Barbara's mother), Barbara and Tom Westerfield. 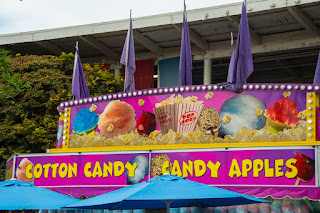 There's certainly lots to choose from, including corn on the cob, BBQ, pies and cobblers, not to mention all the ice cream and cinnamon roll stands.  Corn dogs, bacon dogs, shrimp, sausages, alligator ... just about everything you could ask for. 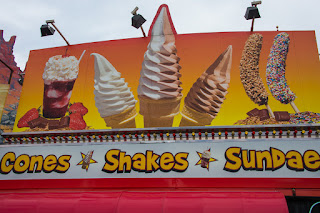 Chili cheese fries looked good, as did all the big fat sausages sizzling on the grills with peppers and onions. 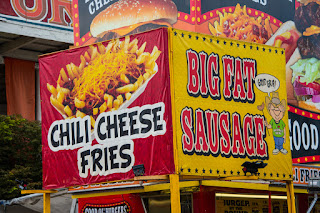 We finally decided on baked potatoes.  They were probably three pounds each!!  Add mozzarella, cheddar cheese sauce, garlic and broccoli, and top it with Pat's salsa.  What a feast!! 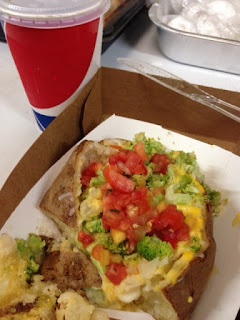 I made a quick trip through the Fine Arts building to check out some of the photography.  This is an art that is awarded ribbons based on the eye of the judge.  Everyone likes different things and different aspects, so I always take the ribbons with a grain of salt.  There were many I thought deserved SOMETHING!! 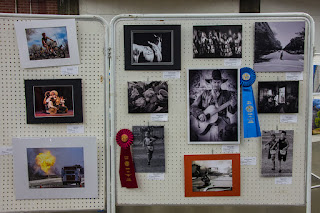 Then there were ones like this, although a painting, not a photograph.  I think I missed something.  It might help if there was a short twenty word description by the artist.  At the very least, it caught my eye and I spent quite a few minutes trying to figure it out. 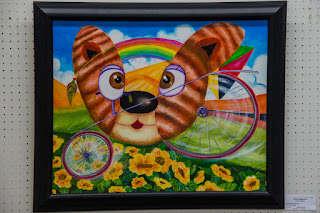 It was later than I expected as I headed off to Nee Hai Bonsai in Fresno.  That is a story in itself that I will relate to you tomorrow morning.  Did I mention it's raining???  In California???  YAY!!!!!